Revenue, abstinence… Or, maybe neither.

Where are we going? To the incentives that cigarette taxes create.

Our story begins in court. Claiming unlawful delivery of 700,000 cartons of cigarettes from 2010 to 2014, New York State and New York City are suing UPS for $180 million dollars. Those deliveries came from states with cheaper cigarettes.

New York’s cigarettes are expensive because it has one of the highest cigarette taxes in the country. As a result, throughout most of the state, cigarettes cost an extra $4.35 a pack while in NYC, it is $5.85. Legislators predicted that people would stop smoking or pay a high tax. Either way, the state benefited.

But it did not quite work out that way.

The reason takes us to New Hampshire. With the New Hampshire cigarette tax at $1.78 a pack (2012), for every 100 packs consumed, 24 percent were smuggled out. Correspondingly, close to 57% of all cigarettes in NYS were smuggled in from lower tax states.

Below, with blue indicating the inflow of cigarettes and brown showing them leaving, you can see New York, in navy, stands out. Washington, Arizona and New Mexico are also high tax states. 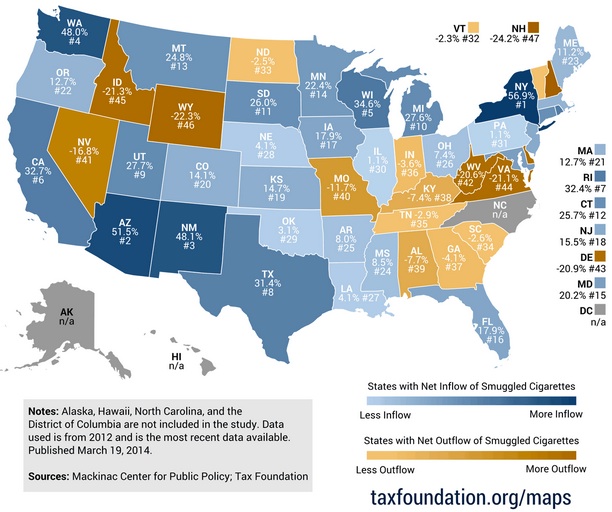 Perhaps NYS legislators read what Napoleon III said when deciding to levy sky high taxes.”This vice brings in one hundred million francs in taxes every year. I will certainly forbid it at once–as soon as you can name a virtue that brings in as much revenue.” I guess Napoleon did not consider the impact of an alternative source of supply.

Our Bottom Line: Inelasticity and Substitutes

The second principle, though, is substitution. The cigarettes that are sold in New York can be replaced with substitutes. When price increases for one (NY cigarettes), the quantity people demand dips. Correspondingly, demand rises for the other item (NH cigarettes).

And that is why as we said at the top of the page, to revenue and abstinence, NYS had to add, maybe neither.

The Government Websites We Most Like (or Hate) to Visit