A letter from John Hancock, famous for his signature on the Declaration of Independence, was sold for $3750 at Christie’s. A document from another signer, Button Gwinnett, (not even a letter) went for $722,500 in a 2010 Sotheby’s auction.

The year was 1757 when 22 year old Button Gwinnett married Ann Bourne in Wolverhampton, England. While the register that he signed remained in the county records office (and now is valued at many hundred of thousands of dollars), he and his wife soon emigrated to the American colonies. First engaged in a dry goods venture that failed, he then purchased a Georgia plantation that creditors also forced him to give up several years later. A business failure, he achieved some political fame as one of the 56 signers of the Declaration of Independence.

Considered a treasure by collectors, the Signers set is composed of documents with the signatures of the 56 signers of the Declaration of Independence. The problem though is that relatively few documents exist with a Button Gwinnett signature. So, anything he signed, whether for his wedding or his financial defaults, has a high price tag.

The first man to create a Signers set was William Buell Sprague. Employed as a tutor by George Washington’s family from 1815-1816, he was told he could have any of the first president’s letters as long as he replaced them with copies. If the story is true, then we can see how he developed an auspicious autograph collection that enabled him to assemble, in 1834, the first Declaration of Independence Signers collection. J.P. Morgan gave a Signers set to the Library of Congress in 1912.

Today, anyone gathering a Signers set knows the toughest signature to get is the Gwinnett. One 55 signature set was even sold at auction. It had everyone except the Gwinnett. The most current inventory of Gwinnett signatures numbers 51. Institutions including Yale, Penn, Princeton, Cornell, The NY Public Library, the Library of Congress, and the English church diocese with the wedding signature (I could only discover that the diocese refused to sell it) have Gwinnetts while there are just 11 in private hands. 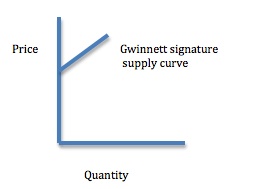 With the position of the supply curve determined by the cost of production, in December 2012, a Signers set on the auction block had an estimated value of $1.5 to $2 million. Even though the set included 48 handwritten letters from the signers, the Gwinnett elevated the price. But, maybe even more interesting, the set did not sell because no one met the seller’s minimum price. So here we have a seller, looking for a price above equilibrium, and not getting it. 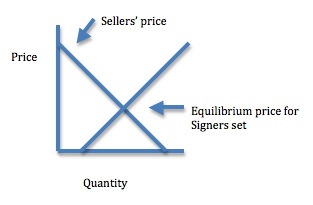 Why Russians Are Rushin' to Buy Porsches