In China they are telling people it’s because of copyright reasons. But really, Taylor Swift has removed her music from free streaming because, ”I think there should be an inherent value placed on art.”

Much bigger than saying her new album, 1989, is not available through Spotify in the U.S. and Alibaba in China, Swift’s decision is about supply and demand in an entire industry.

Our story starts in Sweden during October, 2006. Retired at age 23 and independently wealthy because of an internet ad firm, Daniel Ek said his lifestyle was depressing him. So, he sold his red Ferrari, moved into a cabin to meditate, and decided his next venture was providing access to music. The big challenge was the pirates. Recognizing the allure of free music, his solution was free availability, higher quality and complementary services. And, his affluence and connections provided the time to be patient and the entree to the four big music companies.

Although it took several years to establish Spotify, ultimately Ek was able to sign contracts with Sony, Universal, Warner Music and EMI.

His deal became a part of the huge revolution that was transforming the music business. You can see below that as recently as 11 years ago, CD sales dominated the revenue stream:

Spotify and the Supply Side

Now instead of CDs, downloads and streaming from Pandora, iTunes, Rhapsody and Pandora are dominant. On the supply side, a firm like Spotify pays the music companies with royalties, lump sum payments, and equity (a piece of themselves). For the royalty part of the deal, I have read that Spotify’s formula involves dividing an artists’ monthly streams by its total number of streams and then multiplying the answer by total monthly revenue. Spotify then allocates 70 percent to the labels who pay the artists and keeps 30 percent for itself.

Okay, even if we know that real life is much more complex than a fraction, still you can see the difference between now and a CD dominated music industry. In terms of the dollars, these are the estimates from Time for what the labels have gotten from Spotify: 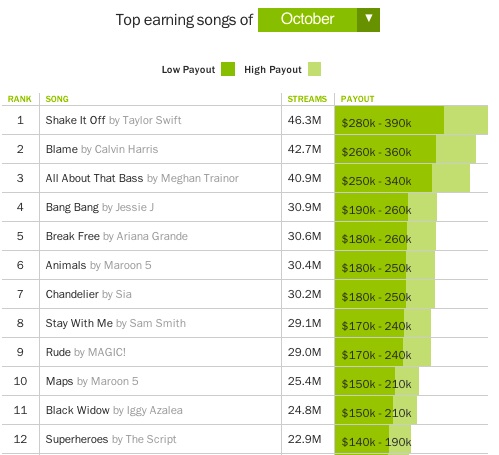 Spotify and the Demand Side

Meanwhile, on Spotify’s demand side, you have free streaming funded by ads and a second tier for which listeners receive additional services because they pay $9.99 a month. And you have Taylor Swift who might not have taken economics but knows she wants more of an equilibrium price than zero.

Like a supply and demand earthquake, the tectonic plates in the music industry are shifting. With new incentives that influence performers, providers and artists, the only constant is Adam Smith’s invisible hand. Firms and performers want profits while listeners want low prices.

How to Become More Productive