Next Day Delivery and the Prisoner’s Dilemma

Combine bad weather, shopper procrastination, and free overnight delivery guarantees and you get a UPS nightmare.

Our story starts last December. Hoping to maximize volume and sneak in another sale day, stores like Macy’s promised overnight delivery on December 23rd. With 70 other retailers offering the same deal (for free sometimes), the results were calamitous. Approximately two million packages wound up in trucks rather than homes on Christmas Day. 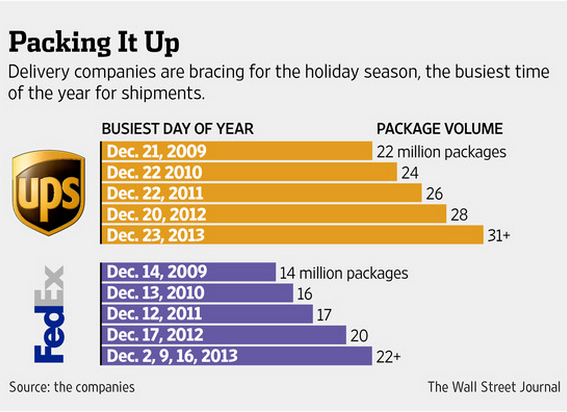 Consequently, UPS and FedEx are asking retailers to avoid the last day squeeze. Responding, Nordstrom moved its December 23rd order deadline for overnight shipping back three hours to noon. Already, Macy’s had a noon deadline and stuck with it.

Not too much of a response? The reason is the prisoner’s dilemma.

Categorized as game theory, the prisoner’s dilemma could apply to two recently arrested home burglars. Separated when they reached the police station, each one knew the punishment for the crime would depend on who did or did not confess.

Based on the diagram (below) of the prisoner’s dilemma, to minimize jail time, each has the incentive not to confess. However, denial could bring the longest jail time if the other person spills the beans. On the other hand, confessing could be a ticket out the door if the other burglar denies the crime. Psychological studies of the prisoner’s dilemma indicate the length of the sentence shapes the response. The longer the sentence for keeping quiet when one’s accomplice talks, the greater the tendency to confess.

So, isn’t Macy’s trying to predict what Nordstrom and other retailers will do? After all, one retailer cannot eliminate next day delivery just before Christmas unless everyone else does also. And, whether considering an arms race between nations or a host of other decisions that depend on what someone else does, you can see how the prisoner’s dilemma extends far beyond the marketplace.

Our Bottom Line: How Firms Compete

Next day delivery is a competitive strategy. With small firms and large ones, whether the market is oligopoly or monopolistic competition, what you think another firm will do shapes your behavior.

The Problems With College Ranking