The Economic Impact of the Ebola Epidemic

Soon after Ebola first struck Liberia in March 2014, the illness directly affected the country’s resources. People who had the disease started to withdraw from the labor force and caregivers had to stay home. As for fiscal policy, government had minimal funds available for healthcare treatment facilities, staff training and supplies. They also had less tax revenue.

Meanwhile, the fear of contagion rippled outward as people avoided work places, public transportation, seaports and airports. With commercial flights down from 27 a week to six, the hotel occupancy rate plunged to 30% in some hotels and 10% in others. In the food sector, a rush to stock up and farms that were abandoned created shortages and rising prices. Then, further exacerbating inflation, speculators have been taking advantage of price volatility.

World Bank economists also predict that rubber exports will drop by 20% because of the impact of quarantine zones on transport. They cite evacuated managerial employees and canceled expansion plans as the reason for less palm oil production. Similarly, the closure of one of the country’s two mines is the cause for less iron ore.

Indeed, from one sector to the next, we could continue with the feedback web of contraction. The World Bank summarized the impact: 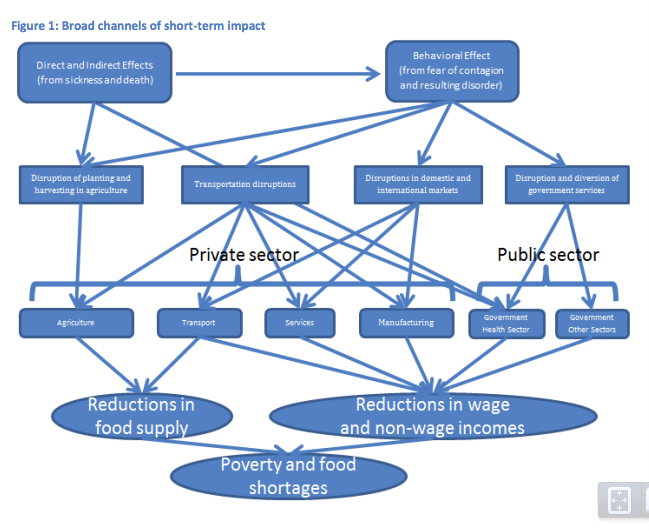 Our Bottom Line: The GDP

The Ebola epidemic is affecting every GDP component. Government’s healthcare obligations are unaffordable, consumers are spending less and hoarding, business spending has shrunk, and international trade has vastly diminished. Still though, according to the World Bank, Liberia’s foregone output will pull its 2014 GDP growth rate down to 2.5% but not eliminate it. For 2015, if the epidemic is not contained, they predicted a more catastrophic 11.9% GDP loss.

Weekly Roundup: From Milkmen to Menus