How Much Do You Care About Your Independent Book Store?

On July 10th, France outlawed free book deliveries and placed a floor under discounts. Hoping to protect independent booksellers, the new legislation perpetuates a 1981 law that said no discount could exceed 5% and prices have to be standardized. (In the 2014 law, the details about shipping and discounts are a bit more convoluted but we will not cover them here.)

Yes, France has a special culture of independent bookstores, maybe 3500 in small towns and large cities. They also claim that Amazon is taking advantage of Luxembourg’s lower rates by reporting taxes there, is selling books as loss leaders and planning to raise prices when they outcompete everyone else.

Where are we going? The independent bookstore debate is all about equality or efficiency.

The same debate surfaced in the U.S. with a 2011 Richard Russo NY Times OP-Ed. Citing friends who said, “They don’t win unless they destroy their competition…” Russo lamented Amazon’s impact on the indies. He quoted one author who said “…losing independent bookstores would be ‘akin to editing…a critical part of our culture out of American life.'” Or, as a bookstore owner explained, “If you like seeing the people in your community employed, if you think your city needs a tax base, if you want to buy books from a person who reads, don’t use Amazon.”

Responding in a Slate column, journalist Farhad Manjoo focused on the benefits of paying less. Authors sell more books, consumers have extra money to spend locally and the economy enjoys more efficiency. Rather than doing harm, Amazon’s e-publishing and e-reader innovations have expanded the publishing world and could even be helping local communities. And yes, on Amazon, you can find comments from people who read.

You can see below how the price floor eliminates Amazon’s ability to discount and ship for free: 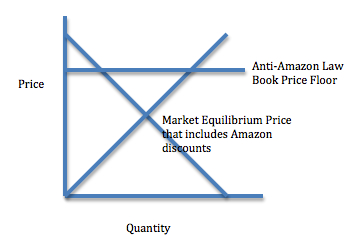 As always, a tradeoff: we can have a mandate for the equal prices that are created by a price floor, or we can have the efficiency of market competition.

Our bottom line: Price floors come in handy when you have an economic group to protect. But the opportunity cost is efficiency.

How To Catch Tax Dodgers With a Lottery

Why Would a Firm Not Want 50 Employees?