The Benefits of “Pay-It-Forward”

Perhaps a pay-it-forward record, at a Connecticut Starbucks, more than 1,000 people each paid for the person behind them during December 2013. The store manager was on to something when he said, “”We hope that it will continue on, even if it doesn’t continue on here, we just hope that it will inspire people to do greater things and inspire people to do more for their communities.”

Called generalized reciprocity, pay-it-forward may indeed create benefits that much more of society enjoys. In a 2013 paper, scholars from Stanford and Hebrew University and the Universities of California, Sao Paulo and Cologne looked at the cause and effect of pay-it-forward. Gratitude, they said, fueled the phenomenon. The gratitude that recipients felt motivated them to do something good for someone else.

Here, an economist would say we have a positive externality. When a transaction between 2 parties benefits a “bystander,” the value of the initial act increases beyond its price. According to the scholars who studied pay-it-forward, the positive externality–that extra value–is a community with more solidarity, trust and generosity.

Graphing a positive externality, economists like to show that the price is cheaper than it should be because of the added social value. 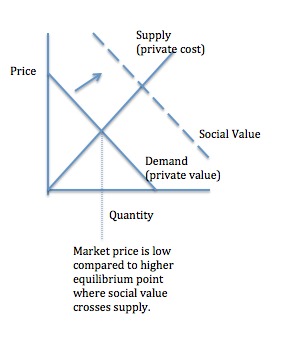 Sources and resources: The xkcd “cartoon” starting me thinking about pay-it-forward articles like these from the NY Times and Yahoo, here and here. From there, I checked the research.

The One Big Reason We Can't Really Cut the Federal Deficit