One Reason That Chocolates Are More Expensive

In an econlife post from September 2013, we presented a spending ladder that emerging market nations like the BRICs–Brazil, Russia, India, China–might climb. At each rung, spending surges and then flattens at that higher level until consumers can afford to climb to the next step.

These are the steps:

Now we can add chocolate to the ladder.

Because of rising demand from emerging markets, the price of cocoa is up. For the BRICs, increased consumption ranging from 20% to 40% is predicted between now and 2018. Currently though, China’s per capita annual chocolate consumption is only 4 ounces. For the average European, it is 17 pounds! (from Euromonitor)

The supply side is also pushing cocoa prices up. For example, when corn prices soar, more farmers switch to corn. It just takes the next crop for the supply curve to shift to the right and prices to drop. With cocoa, it is not that easy because it takes 10 years for cocoa trees to reach their peak. In addition, coping with poor yields, some of the West African small farmers that grow cocoa have been switching to more profitable commodities like palm oil and rubber.

In the US, we will probably see the price of a Mars bar increase. On the other hand, bar size could shrink or the recipe can change.

And here is the ladder: 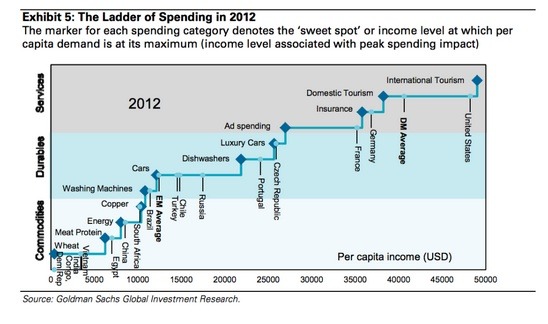 Sources and resources: Our spending ladder originated in a report from Goldman Sachs Global Investment Research, “What the World Wants.” As for chocolate, a gated WSJ article provided considerable detail as did a report from NBC news. And if you want to read about beer and emerging markets, I recommend this paper from the American Association of Wine Economists.