I’ve been wondering about the impact of France’s “millionaires tax.”

At first a 75% tax on individual incomes above €1 million ($1.37 million), the proposal had to be tweaked when France’s Constitutional Council said it was unfair. Returning to the drawing board, the Hollande government wrote a business-based version that was approved last week. The new plan mandates that employers pay a 50% tax on wages that are above €1 million in 2013 and 2014 but not more than 5% of revenue. Add that to social welfare taxes and the rate nears 75%. Maybe 470 firms will be affected.

More than the Germans, the Swedish, and the British, the French tax burden is close to 47%.  In return, cradle to grave services include family subsidies for children, health care, education, generous unemployment payments, and old age pensions. To fund so extensive a support network, everyone contributes social insurance while many fewer–maybe half–pay the income tax.

Here is where demographics and economic growth and maybe Margaret Thatcher enter the picture. The French population is aging. French economic growth is stalled. And, as Thatcher said, “The problem with socialism is that you eventually run out of other people’s money.”

Needing more money, during the past 2 years, the French government has levied no less than 84 new taxes including beer and cigarette tax hikes that started people “grumbling.” While Mr. Hollande responded with a “tax pause,” still he is proceeding with the levy on high end affluence.  Some say as much as revenue, the tax is a symbol of egalitarianism.

Thinking as an economist, my questions are about incentives. When taxes get that high, how do people respond? I can recall that when the top marginal tax rate in the US touched 90%, revenue remained a relatively constant proportion of GDP. 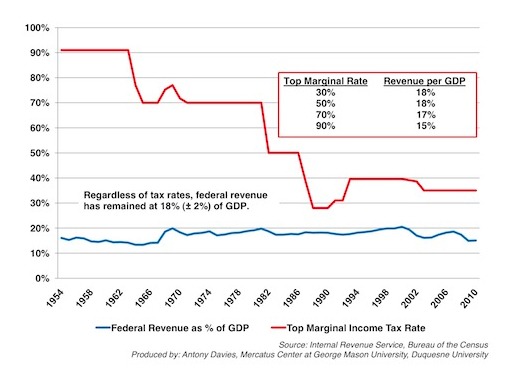 Looking at average marginal tax rates, the results are similar. 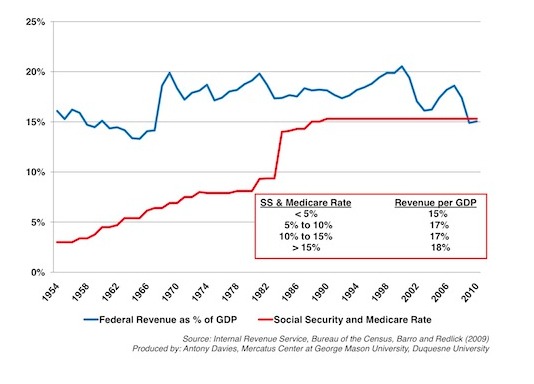 Sources and Resources: For an overview of French fiscal problems, the NY Times had an excellent article while The Economist provided a good complement through its focus on French taxes and fiscal policy. And, a H/T to the Atlantic for alerting me to the Mercatus graphs.

The Invention That Started to Close the Gender Gap

An Unexpected Connection Between Bluefin Tuna and CO2