With temperatures touching 117 degrees F., India’s heatwave is breaking records. Canceling sports and schoolyard activities, schools in Jaipur could open only for three morning hours. At the same time, on the farm, crops shriveled, cows produced less milk, and farmhands could not work.

The solution is air conditioning. But that is a problem too.

When a developing nation hits a certain level of income, AC use soars. Thinking of temperature, a 2015 paper told us that India has 3,120 “cooling degree days” per person. Then, for income, they are becoming increasingly affluent. You see where this takes us. Their AC use is about to soar.

And India wants it to soar. They need their AC to improve human capital, to cool factories, and to boost productivity. They want an increasingly affluent population to be able to buy inexpensive air conditioners.

One study predicts that India’s air conditioning will expand to 69 percent of its households  during the next 20 years.

So yes, more Indians have the money to buy air conditioners. A recent Washington Post article begins with the story of a 34-year-old bank employee. Having saved $110 a month for a decade, she just bought her first home and her first air conditioner. During the summer she runs it everyday.

Multiplying this bank employee by others just like her, we wind up with soaring demand for electricity: 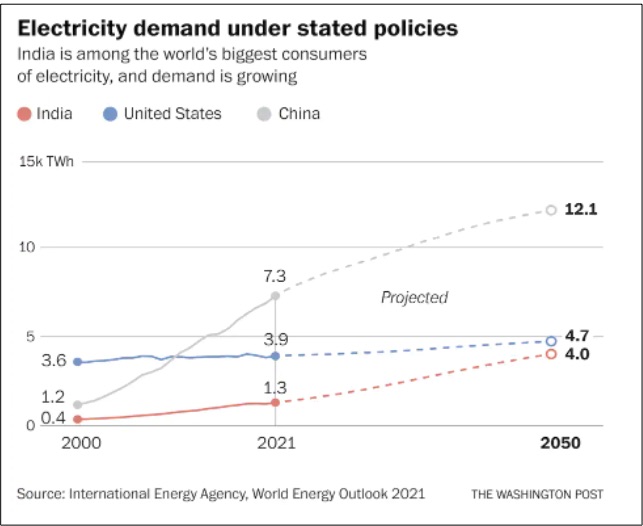 Relatively cheap, coal powers 70 percent of India’s electricity. And that is the problem…and for now, the solution.

My sources and more: Looking at India’s heatwave, the Financial Times and BBC described the details. Next, the Washington Post, here and here, the Deccan Herald and this paper had the AC dilemmas. Then, completing the picture, this Nature article looked at lost productivity. (Please note that several of today’s sentences were in a previous econlife post.)

Looking at Past, Present, and Future Globalization