The Sexist Side of Transport

Unnoticed as gender bias, transport design can make a woman’s daily life tough to navigate. Bloomberg’s CityLab tells us about a path in Germany near Frankfurt. At its narrowest, the path forces mothers walking with children to step into a busy roadway. The inconvenience can be typical because women tend to be the walkers with the kids and the strollers.

Below, you can see that a higher percent of the female respondents said they walked, took the bus, and/or the metro. More of the men drove a car: 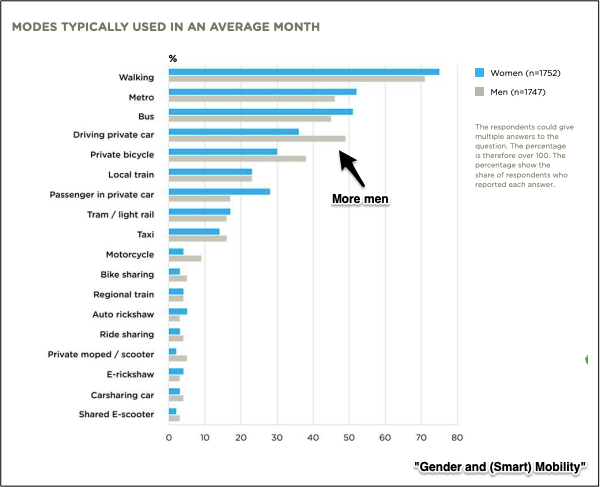 In a recent report, researchers concluded that transport planners need to be aware of who uses what.

When we think snow of removal, the roads first come to mind. With snow plows clearing the major arteries and then the side streets, pedestrian walkways and bike paths are last. But the data indicate that women are more likely to walk and use public transportation. As you might expect, it’s the walkers that slip, slide and get injured. One Swedish city reported that women experienced 69% of the injuries that occurred during winter with two-thirds of those individuals slipping on ice or snow.

It is likely that part-time workers make the multiple daily trips that require mass transit. As a result, women, more than men, take the bus and use the metro. Whether in the car or using mass transit, women “trip-chain.” Away from major transport arteries, they take the children to school, they care for an elderly parent, they go to part time work. It’s the women that make several shorter trips while men commute directly between work and home.

Eurostat numbers tell us that more women than men are part-timers: 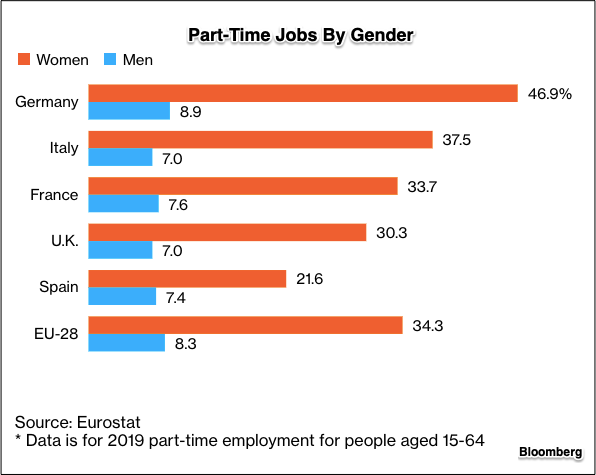 A behavioral economist (and plain old logic) would say your policies depend on your “choice architecture.” In other words, our decisions depend on the environment in which we make them. They depend on the incentives that nudge public works departments and city councils. Because they have been populated by more men than women, their design decisions resulted in gender biased transport.

I would suggest that when public policy and product design are dominated by men, then the choices they make reflect their own life experience. Male dominated choice architecture leads to gender inequity.

Or, as Simone de Beauvoir told us in The Second Sex:

My sources and more: My inspiration came from Invisible Women: Data Bias in a World Built By Men by Caroline Criado Perez. The book is excellent. One reason though that I found it so appealing was its confirmation of our previous post Pink it, Shrink It and Gender Design Discrimination. From there, traveling into new territory, my Bloomberg Citylab newsletter alerted me to gender biased transport and this report.

Please note that parts of today’s post were in a previous econlife.

When Russian Humor and Cars Converged