The Impact of High Marijuana Taxes

Currently in session, the 117th Congress is considering a new version of the Marijuana Opportunity Reinvestment and Expungement Act of 2019. Also known as MORE, the act requires LESS federal marijuana regulation. It was proposed during the 116th Congress.

Right now, marijuana remains a Schedule 1 controlled substance. People that violate its federal restrictions could wind up with huge fines and long prison sentences. However, marijuana’s recreational and medical use is legal in 19 states and Washington D.C. while 33 states say it’s okay medically.

You can see that we have a policy gap between Congress and the states.

Federally legalizing marijuana is not quite as simple as it might sound.

One concern is taxation. A descendant of MORE (with a better name), the Cannabis Administration and Opportunity Act is a 117th Congressional proposal. Like MORE, one provision is a marijuana tax.

The cannabis industry is not pleased.

In its five stores, Washington’s Evergreen Market employs 170 people. While it pays the state’s 37 percent excise tax and a 10 percent sales tax on recreational marijuana, of course there are no federal taxes for an illegal substance. But, if the Congress passes the Cannabis Administration and Opportunity Act, then a 10 percent federal tax that balloons to 25 percent in five years would kick in. Evergreen and other weed businesspeople worry that high taxes could send their customers back to the black market. Equally concerned, states predict plummeting revenue if the federal government wanted a slice of the cannabis tax pie.

The Tax Foundation tells us that cannabis tax revenue during FY2020 has ranged from a high of California’s $474,100,000 to Michigan’s $9,692,684. Meanwhile the Foundation notes that a state’s potential revenue could soar to $1 billion.

Federal marijuana legislation embodies a slew of tradeoffs. It can be broad or narrow. If it is broad, then past and future decriminalization are possibilities as are taxes. Meanwhile, narrower legislative proposals have focused solely on financial services.

The political analysts tell us that narrower provisions have broader support in the Congress. An April Pew Survey says the opposite for the public. Combining Republicans and Democrats, we have majority support for legalizing marijuana: 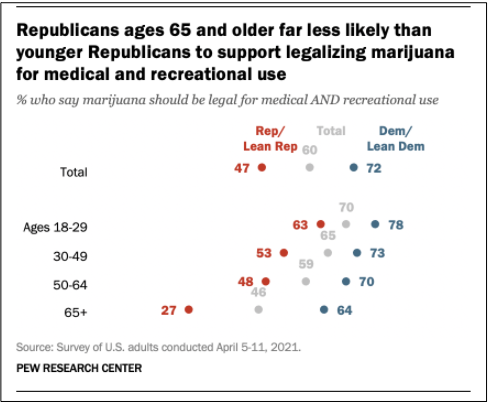 Pew did not ask, though, if anyone wants higher taxes.

My sources and more: For an introduction to the federal state tension, this UPI article is a good start. Then, this fas document tells all you could possible want to know about controlled substances while the Tax Foundation has the facts. And finally, Pew reports marijuana political sentiment. Please note that South Dakota could be the 20th marijuana state after a legal challenge is settled.

The World's Priciest and Cheapest Cities