Where It’s Tough To Select a New Garbage Can

Having been in NYC last week, I saw why they had a garbage can contest. After sifting through 200 candidates from six continents, they chose 12 finalists and then a winner. The criteria for the prototype included looks, light weight, and rainwater run-off.

The winner (below) gets a meh from me:

However, it is affordable. At $175, the cost of each new NYC trash bin is bargain basement compared to San Francisco’s. But San Francisco is creating a designer bin that matches its public toilets.

At a San Francisco Board of Supervisors meeting, a city official said their trash cans were causing the city’s trash problem. As they explained, so unattractive a can encourages dumping and requires excessive maintenance. Another supervisor said the cans lacked “respect.”

This is one of San Francisco’s existing garbage bins:

During 2017, San Francisco announced a design competition. From there, from what I could figure out, they selected some of the higher bids and said that each of its new bins could cost $20,000. Responding to the uproar, they went down to $12,000 and assured the city’s taxpayers that mass production would bring the price to $2,000. Furthermore, the bins would drain rain water, signal when full, and be tough to tamper.

The design prototypes are pretty sleek (and appealing):

You can see that other cities spend a lot less: 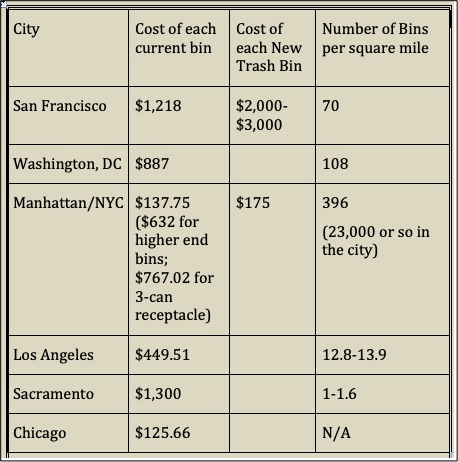 So, how does San Francisco decide?

To make the decision, an economist would identify the opportunity cost. Defined as the alternative you decided not to do, the opportunity cost of a decision always has benefits that you have to forgo. According to a Mission Local article, San Francisco has already decided to spend $427,500 on 15 prototype cans through an obligation encouraged by an official now at the center of a corruption investigation by the FBI. From there, the final contract could be as much as $16 million. You can see that our opportunity cost analysis will have many different kinds of benefits and benefits foregone.

My sources and more: Thanks to The Hustle for alerting me to the garbage can issue and Mission Local for the San Francisco details. From there, I found a very different process in New York.

Please note that I’ve slightly edited the end of this post after it was published.