How a Canal Moved a Bridge

Then, 34 years after that, a man named Mercer immortalized the Panama palindrome:

A man, a plan, a canal-Panama.

Today we need to look at the new Panama Canal Plan and its impact.

In 2016, a Panama Canal expansion plan was completed. The goal was to accommodate huge vessels called post-Panamax ships. . To see how those big ships have affected U.S. trade, please think of an imaginary line.

No, it’s not the xkcd north south line: 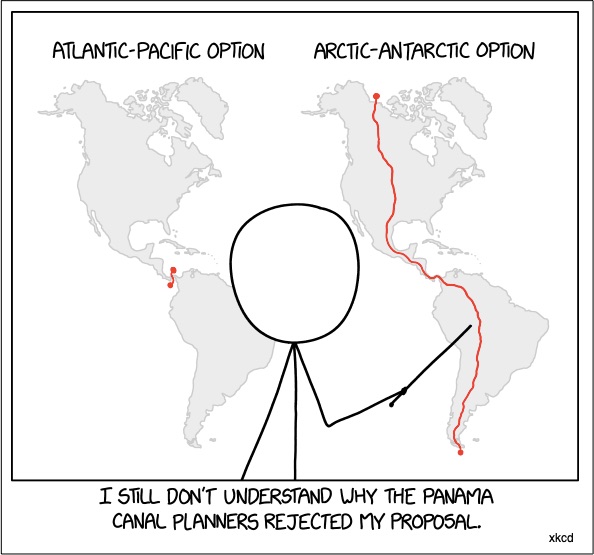 But it is a line located between the U.S. East and West Coast. Determining where supertankers carrying Asian cargo will dock, the line says who will receive goods from NY/NJ or maybe Savannah or Charleston and who will get the delivery from Los Angeles or Oakland.

The position of the line relates to cost. And that is where the Panama Canal’s renovation enters the picture. Because of the expansion, ships that had been too big for the canal were able to pass through and head for the East Coast instead of congested West Coast ports. Choosing an east coast destination, they will nudge that jagged north south demarcation line westward.

But it was not quite that easy.

You can see below that since the 1970s, cargo vessels have grown substantially:

Consequently, a slew of U.S. ports, including Baltimore, Savannah, and Miami needed upgrades to prepare for the supertankers. The Port of Newark N.J. had to deal with the Bayonne Bridge. Located near the port, the Bayonne Bridge was too low. Once N.J. politicians realized much bigger container ships would be moving through a newly expanded Panama Canal, they knew the path to their port had to change. So, they had to spend close to $1.7 billion to raise a 90-year-old bridge from 151 feet to 215 feet above the water. The “Raise the Roadway” Bayonne Bridge project was completed on June 14, 2019.

This is how they did it:

The Wall Street Journal tells us that disrupted trade with China, the Covid e-commerce surge, and the Panama Canal expansion have boosted East Coast port traffic from Asia. Projects like the Bayonne Bridge have made the difference. Yes, western ports still can accommodate big ships better. And Los Angeles is still #1. But based on total containers, NY NJ just replaced Long Beach, California as #2.

The result? East Coast ports’ share of the Asian trade has grown: 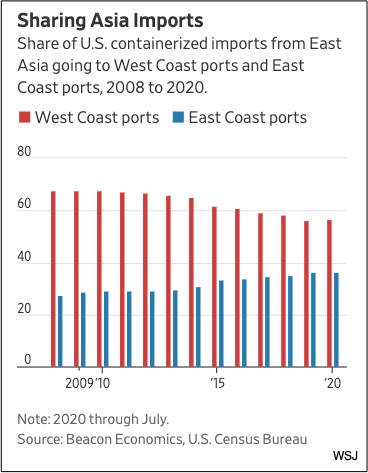 My sources and more: Realizing that yesterday was a Panama Canal anniversary, I checked on the Canal’s expansion impact. From there, the details on the Bayonne Bridge project, here and here, added to the story. And this WSJ article completed the picture. But if you just go to one article, I recommend this Ports Primer from the EPA.

Please note also that at econlife, we have looked at the Panama Canal project here and here.   Our featured image is the Bayonne Bridge.

The Economic Side of a Pringle