During the 1990s, a bread baking machine became an economic legend.

Using a kitchen device to make a loaf of bread was a new idea 30 years ago. So, when Williams-Sonoma introduced one of the first bread making machines, consumers did not know how to judge its $275 price tag. After a tepid start, the company added a fancier $429 machine that was supposed to boost sales. It did. But not how they expected.

Behavioral economists said it was all about anchoring.

Economics Nobel Laureate Daniel Kahneman (a psychology professor) observed that the first fact we hear influences subsequent decisions. Assume, for example, that after being told a jar has 500 jelly beans, we are asked to guess the number of candy bars in another container. Based on Dr. Kahneman’s experiments (described in Thinking Fast and Slow),  people who are told the first jar has 200 beans instead of 500 answer the second question with a lower number. The reason? The first jar became an anchor that biased the second answer.

For the Williams-Sonoma bread baking machine, $429 became the anchor. It biased consumers’ opinion of the $275 price tag. Sales soared because they knew they had a good deal.

Somewhat similarly, Apple gives us a price menu. This year, we could choose from five new iPhones with prices that ranged from $1099 to $399. Unknowingly creating a $1099 anchor, we can perceive the lower amounts as rather cheap.

Some say Apple is creating a Goldilocks strategy with its anchors. You can see below, that for each of us, one model could be too expensive, one too cheap, and the model in the middle might be just right: 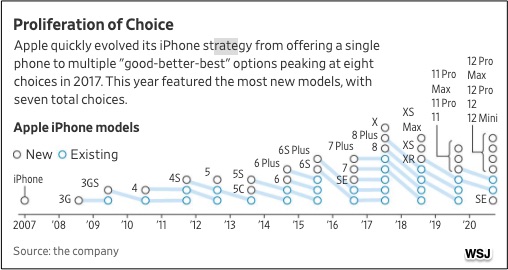 I suspect that we take prices for granted.

Everyday in countless ways, prices, when determined by supply and demand, convey a message. Although a price is a single number, it combines countless facts. On the supply side price propels decisions about production. For demand, it conveys value.

And when we look at several prices, we wind up with anchors, Goldilocks, and bread machines.

My sources and more: WSJ had the article that presented Apple’s (and other firms’) pricing strategy. It reminded me of this paper and our original post where we first referred to the Williams-Sonoma baking machine story.

When a Scotch Egg Is Like an Apple (iPad)