Why Traffic Light Buttons Are Similar to Bicycles

You know those traffic light buttons that never feel like they make a difference when we want to cross the street? Brookline and Cambridge, Massachusetts, and Auckland, New Zealand and Perth, Australia are reprogramming hundreds of those buttons so we won’t have to touch them.

Where are we going? To how COVID-19 is changing our public spaces.

Former Olympic cyclist Chris Boardman said to the British Parliament, “Pick a crisis and you’ll probably find that cycling is a solution.” At the time he had health, pollution, and climate change in mind. But he could also have been referring to social distancing. The NY Times tells us that Citi Bike trips are surging. Comparing the first 11 days in March for 2019 and 2020, the increase was from 310,132 to 517,768. Over the bridges that connect Brooklyn and Queens to Manhattan, bike crossings spiked by 52 percent.

Recognizing that social distancing has made bike riding more attractive, several cities have made it easier. Bogota, Colombia has been building emergency cycleways. In London and Glasgow, riders bike share for free. Meanwhile some cities are trying to do a better job of protecting cyclers from cars.

Other places though have less cycling. In France, Italy, and Spain, the lockdowns include bike restrictions. And, in Seattle and San Francisco, cycling numbers are down.

Meanwhile, traffic speeds are higher because roads are emptier. As you might expect, on trains, ridership is way down. New York’s commuter rail system reported a 90 percent plunge. For San Francisco’s BART, the decrease has been 93 percent.

In the United States, what we pay and how we move has changed: 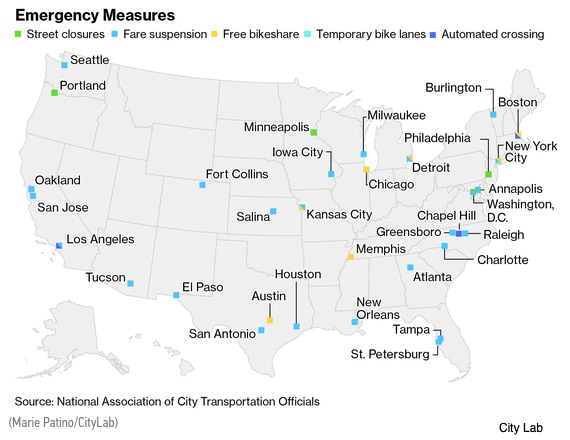 Beyond the U.S. also, cities are responding to social distancing, lockdowns, and the needs of essential workers: 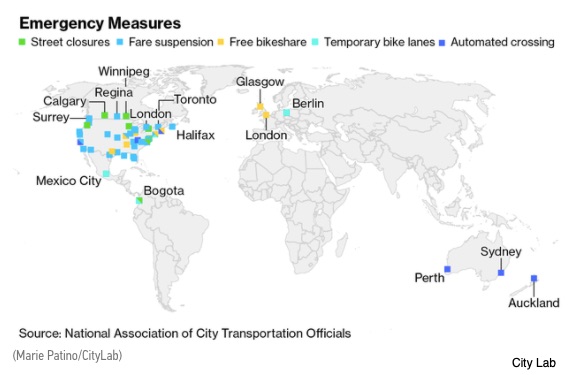 One problem though is the municipal revenue that come from fares and payroll and sales taxes. When you have ridership way down as well as suspended bus fares in more than 50 cities including Detroit and Los Angeles, revenue is bound to nosedive. Consequently, New York’s MTA has requested a $4 billion bailout. A transportation advocacy group has asked Congress for at least $12.8 “in immediate direct financial assistance.”  The $25 billion from the CARES stimulus act that targets transit agencies might not be enough.

Returning to where we began, from traffic light buttons to bikes, our public spaces have felt the COVID-19 impact.

My sources and more: City Lab and the NY Times were the ideal sources for cycling facts. From there, City Lab had more on public transit and redesigning public spaces. And finally, if you want much more detail, one researcher has compiled a list of transit changes.

Where We've Been Scrambling For Eggs