The Mystery of the Cheap Turkey

My local ShopRite supermarket just gave me a coupon for a frozen Thanksgiving turkey. Because my total shopping tab was high enough, I get the bird free…but only if it is frozen.

Precisely when turkey demand soars, prices plunge (even to zero). Since an economist might wonder why, let’s take a look.

Turkey prices are trending lower. This year, a 16-pound Thanksgiving turkey averages $1.30 a pound. At $20.80, it costs four percent less than in 2018 and close to one-third less, adjusted for inflation, than the 31 cents (according to an A&P ad) we would have paid in 1970.

But the real dive occurs just before Thanksgiving.

You can see below that the frozen turkey price slide begins during October. Roughly 10 percent lower than September, November turkey prices stay in that vicinity until Christmas. 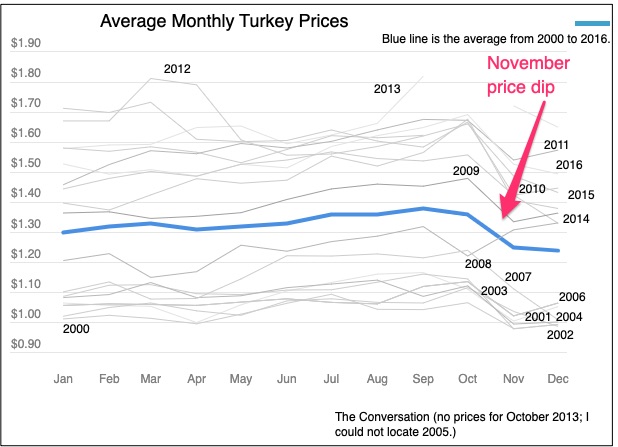 We should start by asking if lower prices are primarily caused by supply or demand. Because the increase in demand should push them up, the supply side has the answers. Supermarkets feature the bird. Other places that don’t sell a whole bird make them available for a limited amount of time.

But the key reason is cold storage.

Planned months before, freezer cases are chock full of turkeys. As turkey inventory builds to its September peak, the supply curve starts its march to the right. The result is a lower equilibrium price and much higher quantity: 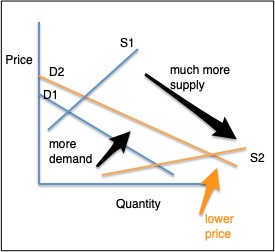 At somewhere between a national total of 500 million to 600 million pounds, the quantity supplied builds until the holiday: 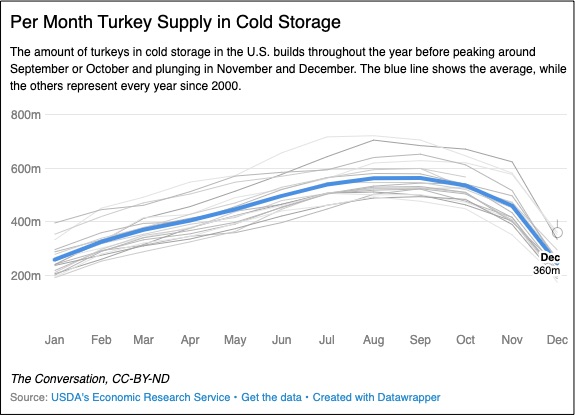 Meanwhile, fresh turkeys are entirely different. Just like the price and quantity of roses skyrocket for Valentine’s Day, so too for fresh turkeys at Thanksgiving. With both, it is more expensive to provide a fresh product during peak demand. And for both, on the demand side, there are fewer price sensitive buyers.

Returning to where we began, I guess we could say that the mystery of the cheap turkey is a cold case (but not really since we solved it).

My sources and more: Thanks to Marginal Revolution for linking to the turkey price anomaly and to The Conversation for more detail. After that if you still hunger for more turkey facts, do go to Food Dive, the USDA, the Chicago Tribune, and the NY Times Magazine.

Our featured image is from the AP (Rick Bowmer) via The Conversation.

The Online Shopping Nudges We Should Ignore