What We Buy When We Are Single

Procter & Gamble is test marketing giant rolls of toilet paper. Called Forever Rolls, they could last as long as two or three months in a one person household. Since singles typically have less storage space, bigger rolls are ideal for people who don’t want to store smaller size backups.

You can see that more of us are living alone: 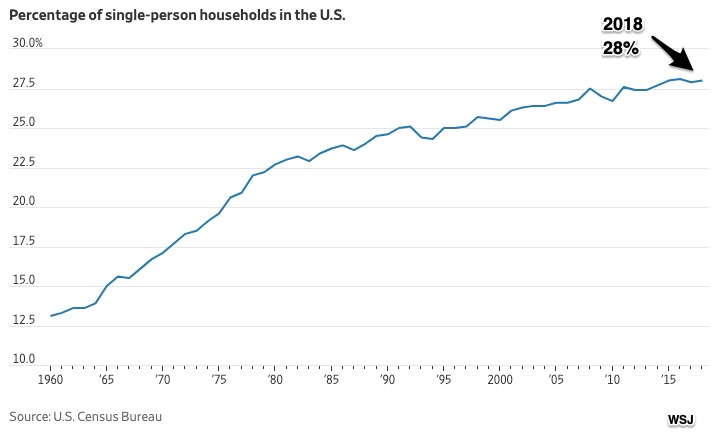 And living alone will impact what we buy.

The Betty Crocker people at General Mills saw cake mix sales drop and single slice deli aisle purchases rise. Projecting that the number of one and two person households will rise by 7 percent by 2024, they created Mug Treats. As they describe them, you just place your batter packet in the microwave and wind up with a single freshly baked slice of cake.

Appliance demand is also changing. Instead of asking about the number of towels that fit, smaller households care about washer size. One appliance maker said that single person households purchase 19 percent of major appliances. Responding, they are making scaled down dishwashers, refrigerators, and cooktops that fit into smaller kitchens.

For reasons that range from aging populations to smaller families to divorce, the gap between population and household growth will probably grow. According to the World Economic Forum (WEF), Scotland projects 9 percent population growth by 2037 while the increase in households will be 17 percent. England tells us that by 2041, it expects household growth to exceed a 16 percent rise in population by 7 percent.

You can see below that one person households have increased in developed nations: 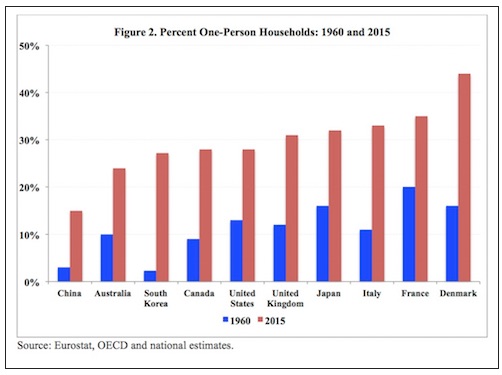 Because of the extra homes that will need appliances, roads, sewage hookups, and so much more, the Atlantic’s City Lab said we have a “ticking household bomb.” In 2014, they called it a massive sustainability problem.

While I suspect the economic growth tradeoff could be greener than City Lab expected, we can be sure that smaller households will have a big impact.

My sources and more: WSJ was a handy place to start for living alone facts. From there, WEF, City Lab,  Deloitte, and IPS News provided insight.

Our Weekly Economic News Roundup: From a Wealth Tax to a Kid's Allowance

What the Corporate Ladder Says About Gender Equity