Wall Street’s high frequency trading has taken stock markets to the world of the nanosecond and perhaps even the pico- or femtosecond. The importance of time, though, is nothing new for traders.

Imagine a sequence of poles on hills between New York and Philadelphia. Called an optical network, the poles had boards with information on them. Just add people with telescopes and you wind up with one 1830s broker who got the news before everyone else. Once his facts arrived, he was able to base his trades on what others would soon find out.

Somewhat similarly, in 1865, U.S. financier Jim Fisk chartered a fleet of speedy boats. Destined for London, they carried news of the defeat of the South and instructions to short confederate bonds. Soon after, the bonds plunged to zero and Fisk reputedly made a fortune.

During the 21st century, we lay fiber optic cable and use microwave networks instead of poles, boards, and telescopes. In Flash Boys, Michael Lewis tells us that crews were racing in 2009 to bury the cable that would connect a data center in Chicago with a Northern New Jersey stock exchange. Moving along the shortest possible “route,” data could travel round-trip in an eye blink–13.3 milliseconds.

Fiber optics and microwave networks have facilitated this huge volume of fast trading: 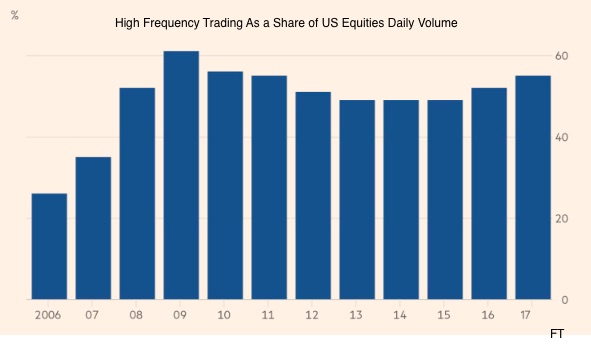 Our Bottom Line:  The Importance of Time

Whether looking at the 19th century, 2009, or now with a new project called Go West that links Chicago, the Pacific coast and Tokyo, we have one common denominator. Time has always been important.

However, in the 19th century, time meant days or hours and then minutes. Now, because millions of trades can be placed in a second, stock markets require technology that grabs each one in tiny time units. Stated more precisely, they need a timestamp for each trade in nanoseconds and eventually perhaps, a femtosecond.

But also remembering that relatively recently, traders cared about who had a faster boat, a horse, or an optical network.

My sources and more: Thanks to the NY Times for alerting me to research on the ever-smaller time increments stock markets require. For the next step, MIT and FT had the tiny time explanations and this FT had the current application. But if you like history, I recommend this article on “speedy” trading from the Museum of American Finance.

Please note that this post was edited after publication to improve its clarity.