How to Measure Our Misery

An economist could say that three “lows” and one “high” bring happiness:

Taking the flip side, they also let us identify misery.

Economist Arthur Okun (1928-1980), created the first Misery Index. By adding together the inflation rate and the unemployment rate, he had a measure of economic distress. I guess it makes sense that when purchasing power dips and joblessness climbs, there are fewer smiles.

Now though other economists have taken the idea a step further. Johns Hopkins Professor Steve Hanke tells us that we should add interest rates and growth to the equation. More precisely, he totals the unemployment, inflation, and bank lending rates. Then, from that number, he subtracts the percent change in per capita GDP growth. When the first three rise, they are the “bads.” But if the last one goes up, it is a “good.” You can see that high numbers are alarming.

Returning to the Okun approach, we can use data from a 2016 paper to see the most  miserable states during the Great Recession. To get his numbers, an SMU economist added his inflation rate formula to the unemployment rate. (The NBER dates for the recession were December 2007 to June 2009.)

From a list of the 50 states, these were the five most unhappy:

Returning to the Okun approach, for the worst U.S. numbers, we can look back to the stagflation of the early 1980s when we had a stagnant economy and inflation. Now though, combining exceedingly low inflation and unemployment, our March misery index was 6.46:

However, even with such a low index number, the U.S. is not among the 10 least miserable countries: 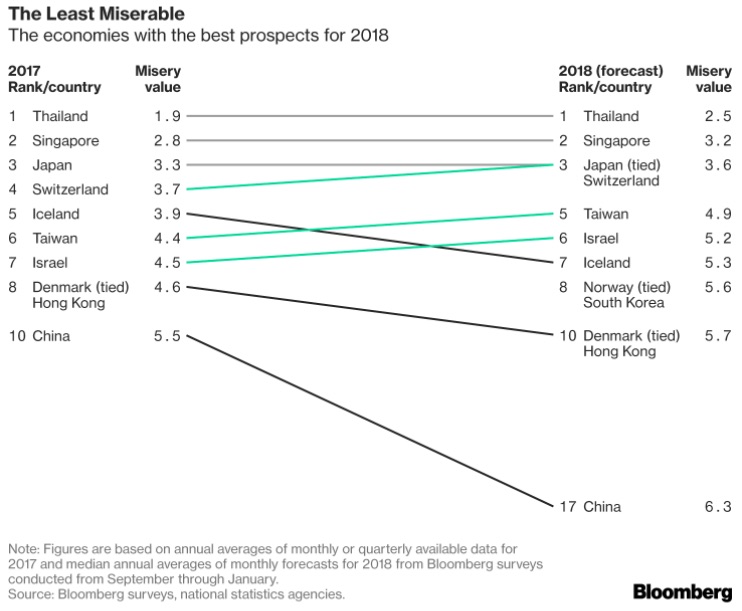 Like all statistical yardsticks, a misery index can be a handy tool. However, we should also remain aware of its defects:

So, even with the U.S. Misery Index approaching its 60 year low, we might be sadder than we think.

My sources and more: The more you look, the more misery indexes you find and the more interesting it becomes. The Hanke list and some analysis were at Cato while this paper had the U.S. states numbers. Meanwhile, there were many possibilities at Bloomberg.