Why You Should Apply To College Before March Madness

Having made it to the Final Four, Loyola-Chicago is the Cinderella team at March Madness. And that means an applicants bump.

A Florida Gulf Coast University sophomore says he’d never heard of his school until March Madness. But when they beat the #2 seed Georgetown and #7 San Diego State, he decided to apply there. This FGCU sophomore from New Jersey was not alone. Success at March Madness, especially when unexpected, pumps up nationwide interest.

After its 2016 March Madness Division 1 Championship, Villanova’s applications were up from 17,266 to 21,095–a 22% pop. As they told Bloomberg, the Wildcats had 50,000 media mentions during the month of the tournament and made it to the front page of 200 or so newspapers. As the team’s Twitter followers jumped from 14,000 to more than 84,300, the school’s followers on Twitter and its Facebook likes also increased.

The key though is the unexpected. After their surprising victories, Butler (2010), Lehigh (2012), and Wichita State (2013) each got the applicants bump. But not necessarily UCLA. Because they’ve been at the top or close to it multiple times, a UCLA win does not grab the nation’s attention like a Cinderella team.

These are some of the schools that benefited from the bump: 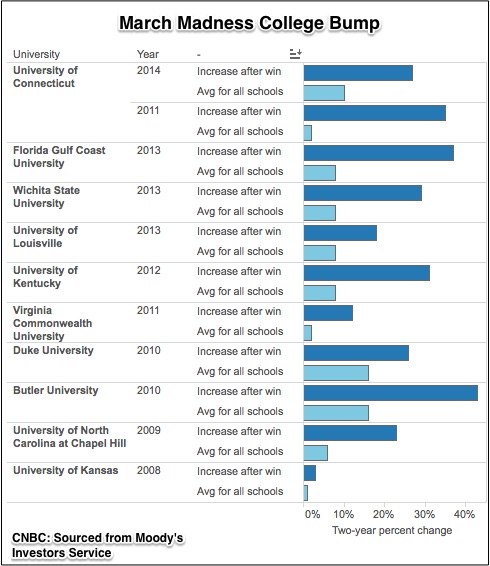 We could say that March Madness creates a change in demand for a Cinderella team’s college admissions market. With the demand curve representing student applicants, and supply, the slots in the freshman class, the school suddenly has its utility and the size of its applicant pool change. As two determinants of demand, they nudge the demand curve upward. The result is a higher equilibrium point. And no, tuition does not rise. Instead, we can assume that equilibrium represents the credentials students need for acceptance.

I drew this hypothetical curve for Loyola-Chicago: 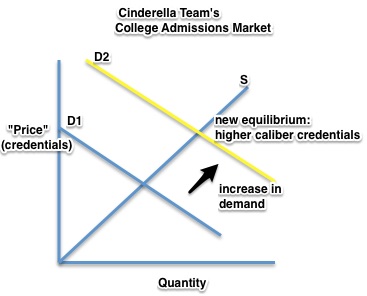 So, whether Loyola-Chicago wins or loses, still their demand curve should increase for the newest group of applicants. Suggesting the higher equilibrium is accurate, one study even indicates that applicant quality has gone up.

My sources and more: Thanks to my econ student Morgan for alerting me to the admissions/March Madness connection. Because of Morgan, I discovered the facts in the Atlantic, U.S. News, Bloomberg, and from CNBC.

Econlife Quiz: Do You Know Your Baseball Economics