Home to approximately 179 residents, the tiny village of Linndale, Ohio is famous for its traffic tickets.

On the 422-yard stretch of I-71 that sits within its mile-square borders, the Linndale police force snagged close to 2050 speeders in 2013. The revenue covered almost all of the municipality’s expenses. Even now that the state of Ohio made the tickets less lucrative, Linndale still collects more than $800,000 from traffic cameras on a street that runs through town. You just need to go 37 mph in a 25 mph zone and the fine is $125. Exceed the speed limit by 30 and the amount jumps to $250.

Outrageous to Ohio’s legislators, Linndale’s revenue stream could be rather appealing to cash-strapped cities.

The annual report from the National League of Cities has become less upbeat. While many cities’ fiscal health had improved since the Great Recession, now, some are not quite as well.

The source of the strain is predictable. On the spending side, cities have aging infrastructure to resuscitate and rising wages and benefits to fund. Meanwhile though, property tax revenue has been growing more slowly and e-commerce is diverting sales taxes.

Thinking of microeconomics, we can look at municipal finance problems through a business lens. Private firms typically have variable and fixed costs. Like their name, the variable costs fluctuate. Including expenses that range from inventory to electricity, variable costs depend on  business volume. By contrast, fixed costs like rent and insurance are going to be there, year after year.

Similarly, cities have fixed and variable costs. And those fixed costs–especially pension obligations–are a big part of the problem.

Below, you can see U.S. cities with populations above 250,000 that have relatively high fixed cost spending: 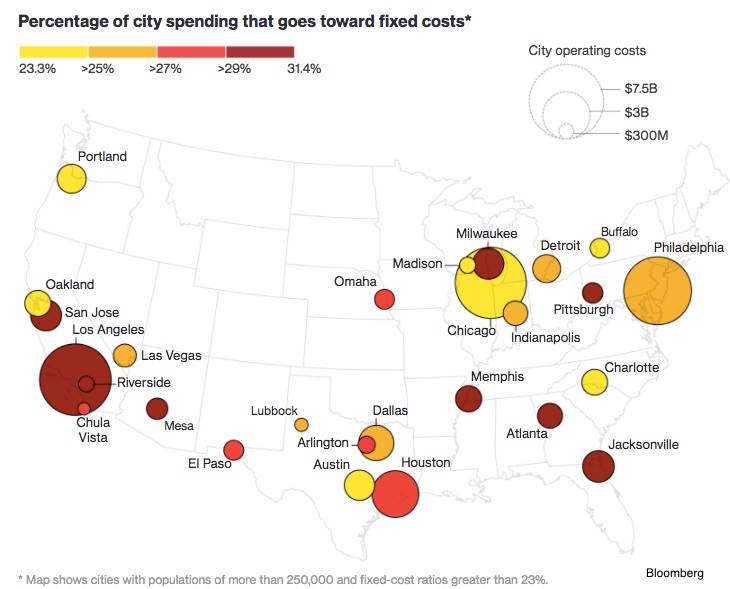 So, when we ask what happens when you give too many traffic tickets, the answers could be surprisingly affirmative.

My sources and more: Making a 5-mile walk much more pleasant, an NPR podcast from This American Life introduced me to Linndale. If you want to hear more about Linndale’s tickets, I do recommend here and here the story of their clash with the state government. Then, it was logical to take the next step to the bigger topic of municipal finance at Bloomberg, here and here.

What a $450 Million Price Tag Tells Us

When Garbage Is More Than Trash