#TBT: Today we look back to how we used to trade stocks.

Our story (sort of) starts 225 years ago on Wall Street with the origin of the New York Stock Exchange (NYSE).

Gathering in coffeehouses or under the buttonwood tree at 68-70 Wall Street, a group of gentlemen traded U.S. government bonds and commodities. As the market makers who bought and sold stocks and bonds, their role echoed what the specialists wound up doing on the NYSE. Responsible for maintaining an “orderly” market, the specialists made sure prices moved rationally. And no, they were not doing everyone a favor by gradually easing stock prices up and down. They too expected a profit.

I can recall visiting the NYSE during the 1990s when the specialists stationed at the “trading posts” on the floor had real work to do. Go to one post and you could buy IBM while another might trade General Motors and a third, GE. Exciting to watch, the trading activity was between the specialists and the floor brokers with instructions to buy or sell.

You can see below how the floor of the exchange used to be covered with small pieces of paper, discarded after a trade was done: 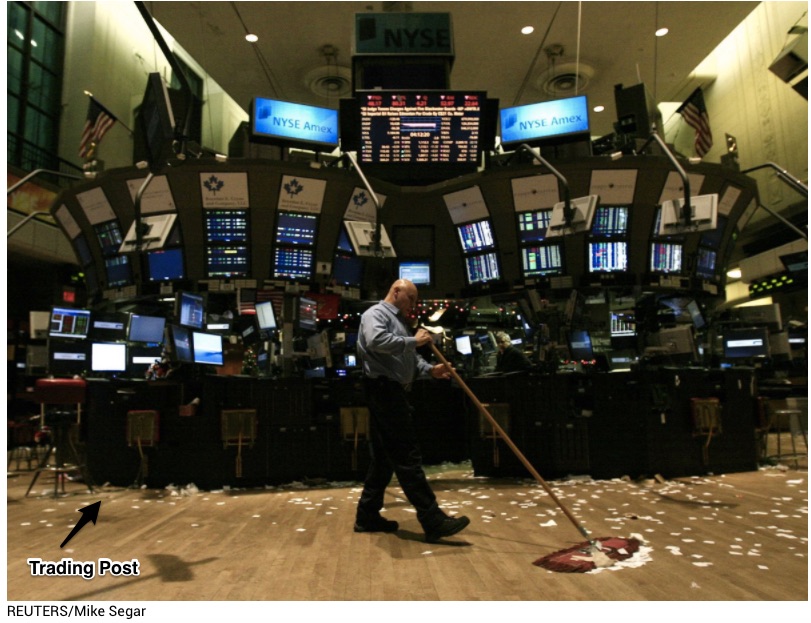 Rather than specialists, floor brokers and trading posts, today’s markets are about computers exchanging information in milliseconds. Among the fastest, we have the high-frequency traders. Whereas Warren Buffett’s Berkshire Hathaway has owned Coca-Cola stock for more than 25 years, a high-frequency trader might own Coca-Cola or a security that relates to it (called a derivative but let’s not think about that now) for 25 milliseconds.

Here is a simplified version of how it works:

Listening to its algorithm, a computer identifies a flood of buy orders for a certain security. Then, it just has to zoom in and purchase those shares. The trick though is doing it before anyone else does. Within maybe 25 milliseconds, it has to beat all other sellers. The goal? Make less than a penny per transaction. Added together? Many millions of dollars and countless trades.

Fundamentally, high-frequency traders are looking for market volatility. For currencies, futures, options, bonds, when markets are gyrating up or down, price irregularities occur. A stock, for example, might suddenly be cheaper than expected or there might be that deluge of buy or sell orders. At that moment, the super speedy computer swoops in to take advantage.

On May 6, 2010, we saw why we could have used some specialists. In Stocks For the Long Run, Wharton professor Jeremy Siegel tells us that stocks hit an “air pocket” at 2:42 p.m. For no apparent reason, the Dow Industrial Average dove more than 600 points in just 5 minutes. Already down by 300, after those 5 minutes, the Dow’s drop totaled 999 points.

When you are describing a flash crash, sometimes a graph can say it all:

Subsequently, an SEC investigation of the crash cited the computer interplay that shot all downward. Just one of many anomalies, a share of the consulting firm Accenture went from $38 to a penny (!!) between 2:47 and 2:49.

No specialist would have let Accenture take that disorderly plunge.

We need financial markets so that firms can raise money, individuals can invest savings, governments can borrow…the list could be endless. Whether human or computerized, dependability, integrity and liquidity are essential.

I know we cannot go back (although the descendant of the NYSE said during January, 2017 that it would be delaying some trades) but it was nice depending on people rather than algorithms.

My sources and more: While articles on high frequency trading and its problems abound, it’s the books that were superlative. Two I especially liked were Michael Lewis’s Flash Boys and Frank Partnoy’s Wait. In addition, Jeremy Siegel’s Stocks For the Long Run is a classic that I use as a handy reference.

Please note that several sentences in this post were published in a previous econlife and it was edited after publication.

Why Gender Word Barriers Could Be Worse Than Sticks and Stones

Why Competitive Eating is About Much More Than Food