How the Power of the Market Makes Airline Passengers Happy

Airlines used to bump ticketed passengers off an overbooked flight. But then an economist had an idea.

Airlines always seem to have no-shows. If they ignore the problem, they have empty seats and less revenue. But if they overbook, then they anger their customers when several are bumped off the flight.

Before the 1970s, airlines generated considerable ill will when they randomly bumped passengers on overbooked flights. But because fares and routes on interstate flights were regulated by the Civil Aeronautics Board (CAB), the downside of bumping was minimal.

After deregulation (1978) though, airlines had to compete. Here, economist Julian Simon enters the picture. A professor at the University of Maryland, he saw how airlines could solve their overbooking problem.

They just needed an auction.

Too many passengers at the gate? Then present them with offers they cannot refuse. Using the value of vouchers on future flights, the airlines just had to move high enough for people to happily “sell” their seats. The airline would be pleased because their planes were full. Meanwhile, bumped customers felt good because they made the decision to fly later.

Seeing the idea’s brilliance, American Airlines was the first to ask if they could use it. Others followed and by 2009, it was a multi-million dollar win for the airlines and their passengers.

When a market functions well, it satisfies demand and supply at equilibrium.

On those overbooked flights, they had too much demand for seats. To lower that demand, they just had to make a substitute so valuable that passengers would switch.

Below, the demand curve on the overbooked flights shifts to the left. The reason? Those free vouchers that were worth a high price created the incentive to switch: 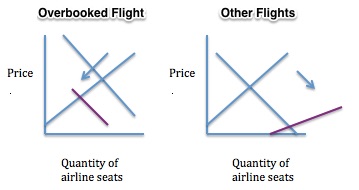 Perhaps United forcibly bumped a passenger several days ago because it did not grasp the power of the market.

My sources and more: An interesting book, Trillion Dollar Economists tells the origin of airline overbooking auctions. If you just want the story, this excerpt on Amazon tells all. But do read onward for more on economist Julian Simon in this brief article and for his own explanation. Finally, a thanks to Marginal Revolution for alerting me to Dr. Simon’s contribution.

Where Cash (sort of) Rules