How Affluence Relates to Pollution

China’s first three five-year plans had no mention of the environment. Then in plans five through nine, there was more. And now, looking at plans 11 to 13, we would see that 5% of all words relate to ecology, energy or the environment.

Where are we going? To the connection between China’s economic growth and the environment.

In the beginning of a 2017 Journal of Economic Perspectives article, scholars from MIT and USC tell readers that in 2013, 99.6% of China’s population was exposed to air pollution levels that exceeded WHO levels. Moving onward, they discuss its causes and impact on different cities.

The key though is that they conclude with a rosier future. China’s more affluent consumers are buying masks and filters at home. They are affecting housing markets by avoiding polluted communities. And they are sending a clean-the-air message to their bosses and politicians.

Famous for creating (what became) the GDP, Nobel Laureate Simon Kuznets (1901-1985) also has a curve that we associate with his name. Although Dr. Kuznets and others have warned us about the curve’s limitations, still, it’s a handy way to consider per capita income and pollution.

The Environmental Kuznets Curve (EKC) says that per capita income growth has an environmental turning point. Initially increasing as per capita income rises, pollution levels start to drop when income reaches a $5000-$8,000 range. At that point the manufacturing sector and people’s concern with health both rise. The result is less pollution.

Below, I’ve copied a graph displaying the EKC and its alternatives. 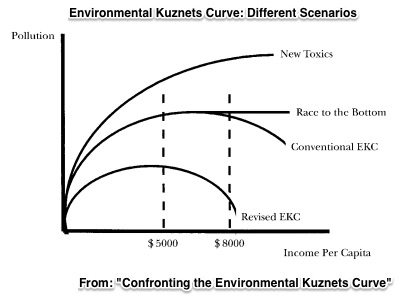 Individuals who agree with the New Toxics  line and the Race to the Bottom suggest that affluence and pollution have a direct relationship. When one rises, the others do too. And even those who support the EKC suggest that your time frame and geographical focus limit its universality.

For China though, the EKC could work. And then we will see more environmentally related words in the next five-year plan.

My sources and more: Good for a foundation, this paper on the EKC presented the debate. It complemented this JEP focus on Chinese pollution and Timothy Taylor’s analysis in his Conversable Economist.

A Happy (and sad) Razor and Blade Story

A Tale of Two T-Shirts