Where a Cranberry Meets NAFTA

Nantucket’s cranberry problem is about more than fruit.

Through Canada, it takes us to NAFTA and globalization.

Nantucket has been growing cranberries for 200 years. As an island off the Massachusetts coast, its sand, water and climate have been ideal for cranberry cultivation.

But now, warmer winters are a concern. With warmer winters,  the bogs can’t ice over solidly. They need the ice for the trucks that drop sand across the bog. When the ice melts, the sand helps the new shoots to grow.

The bigger worry though is Canada. At first, Nantucket was able to respond with more organic cranberries. However, seeing that Canada is accelerating its organic output, the Nantucket growers decided to reduce acreage.

Canadian cranberry cultivation is much more advanced than Nantucket’s. According to the Nantucket newspaper, the Canadians have fields like factory floors, robotics and hybrid vines. Or, as one grower said, the Canadians are like “a modern production line” while Nantucket is “how they made Model T’s.”

You can see below that Canada’s cranberry exports have grown: 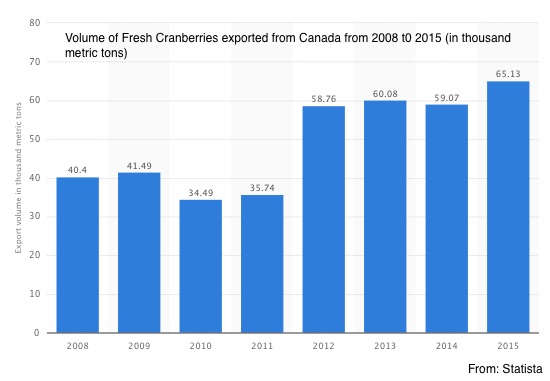 So yes, Nantucket is experiencing the downside of NAFTA. Primarily because of Canadian competition, their production is down, cranberry prices have dropped, and the pressure to mechanize is up. But it gets ever more complicated.

Wisconsin’s cranberry production is up:

And cranberry exports have increased:

Let’s conclude just by saying that cranberries are another example of the complexities of NAFTA and globalization.

My sources and more: Two Massachusetts newspapers, the Patriot Ledger and Nantucket’s Inquirer and Mirror tell the cranberry story. But if you want a lot more detail, do look at this report  from Massachusetts on industry problems and solutions. (The title of this post was changed after publication.)

The Ups and Downs of Tipping

Why There is No Such Thing as Free Parking