The Ups and Downs of Tipping

In restaurants, tipping is not necessarily about service. Just by placing a piece of candy on a check, servers get larger tips.

A Cornell professor has observed that attractive, slender, blonde women in their 30s get higher tips while men’s looks seem not to matter. But the color of their shirts could count. In one study male waiters wearing red shirts were tipped less than those in white or black. It also helps to touch the shoulder of diners briefly when giving them a check.

For some, tipping is a way to impress people (like Seinfeld’s George, below). For others, it is about altruism, gratitude, good service or just because we are supposed to tip. And for parking valets and bartenders but not doormen and hotel maids, duty seems to motivate our tips.

Our Bottom Line: The Tipping Wage

As you can see below, the tipping wage varies from state to state: 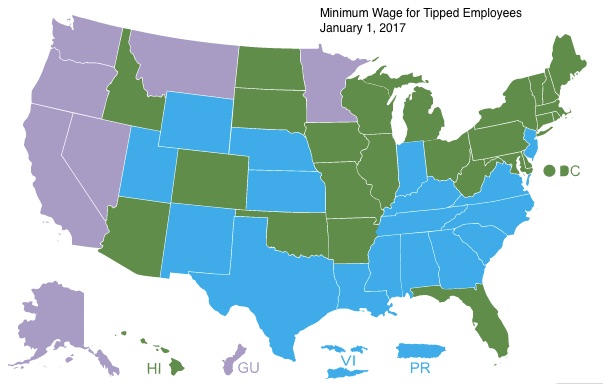 Because it is so low and tips are less than dependable, the tipping wage can be controversial. It has been entirely eliminated in California, Washington, Oregon and five other states. At the other extreme, Massachusetts has a huge gap between its $11 minimum wage and a $3.75 tipping wage. Federal law does say that employers are supposed to cover that gap when tips are insufficient but it doesn’t always happen. And, we’ve written about restauranteurs who want no tips.

As economists, we can conclude by saying that any kind of minimum wage is a floor. Below, the upward sloping supply curve represents workers who are willing and able to provide more labor at a higher wage while the downward sloping demand curve is the employers, happy to hire more people when wages are lower. Called floors because they prevent wages from moving further downward, the horizontal lines create job shortages and worker surpluses because they cross employers’ demand curve before they get to the workers’ supply curve (at a higher quantity). 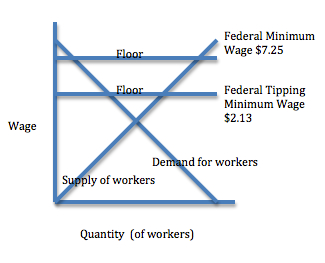 My sources and more: You might enjoy pondering Eater.com’s strong feeling about the tipping wage and fivethirtyeight’s explanation. But for real insight I recommend Professor Michael Lynn, Freakonomics, and the Journal of Hospitality and Tourism Research.

Several sentences in this post appeared previously in econlife.

Deciding How Much To Work

Where a Cranberry Meets NAFTA