Like no one else, the Swedish researcher Hans Rosling knew how to use a bubble.

Where are we going? To making statistics memorable.

Assume you want to compare life expectancy and GDP per person from 1800 to 2015 for two countries. Not only would your data be massive but the analysis could be daunting. Dr. Rosling made it simple with his bubble animations.

Below, I selected India (pink), Ghana (blue), the U.S. (green) and the U.K. (yellow). Displaying the end of the animation at Gapminder.org, the image shows the chronology of each country’s progress. Not only does it let you compare them but also you can form hypotheses about how life expectancy and GDP correlate.

As you can see, wealth and health ascend together:

From these kinds of bubble animations, Hans Rosling hoped we would distinguish among nations. He wanted us to know that Africa was not a monolith. Each country has its own position on an economic and health continuum.

At the end of this Gapminder bubble animation, you can see that life expectancy in Cape Verde is 22 years more than in Swaziland: 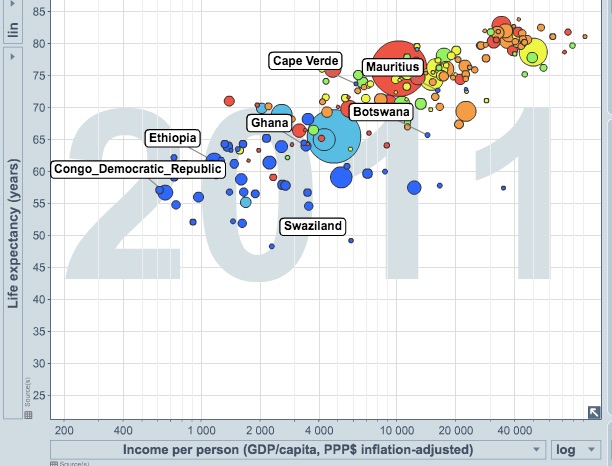 Dr. Rosling also demonstrated that as wealth and health ascend, so too does CO2 (until it starts to drop):

Our Bottom Line: The Rosling Legacy

“We can stop population growth, we can eradicate poverty, we can solve the energy and the climate issues but we have to make the right investments. I know a good world is possible if we leave emotion aside and just work analytically.”

His message? Only with accurate facts can we help people live healthier and wealthier lives.

Here are two of my favorites from Dr. Rosling:

Why washing machines are amazing:

My sources and more: Gapminder has it all if you just want to see Dr. Rosling’s work. One warning. Once you start, it’s tough to stop. I do also recommend taking a look at this NY Times obituary and listening to this podcast if you have less time. Best of all though are his TED talks.