The Deal That a Chinese Firm Could Not Refuse

The result? Production is shifting to Vietnam, Bangladesh, India…

Composed of lower tax rates and a large “cash” incentive package, the offer given to China’s Keer Group must have been irresistible. One newspaper says that Keer selected South Carolina as a factory site that would employ 500 people because of a deal that could be worth $90 million. The incentives included a $36 million land subsidy, a sewer and water infrastructure, eliminating property taxes and a 15 year income tax exemption. Sweetening its allure, South Carolina wined and dined Chinese executives during their visit.

Spinning yarn is a capital intensive activity that generates economies of scale. In Keer’s new South Carolina plant, huge machines remove the cotton seeds and dirt, send the fluff to carding equipment and create spools of yarn and thread. Those spools are sent to Asia for the final labor intensive stages of fabric production.

And this is where it gets even more interesting.

Once we have a Trans-Pacific Partnership, then China needs a U.S. presence to take advantage of the trade deal. Since she is not a signatory, sending yarn from the U.S. to Vietnam, she can take advantage of tariff free relationships.

Add to all of this wages that have risen in China and stagnated here and you have a shifting financial landscape that makes the U.S. more attractive. Below you can see China’s increase in manufacturing costs from 2004 to 2014:

We could say that the comparative advantage for making yarn has shifted from China to the U.S. because China has more of an opportunity cost (sacrificed alternatives). 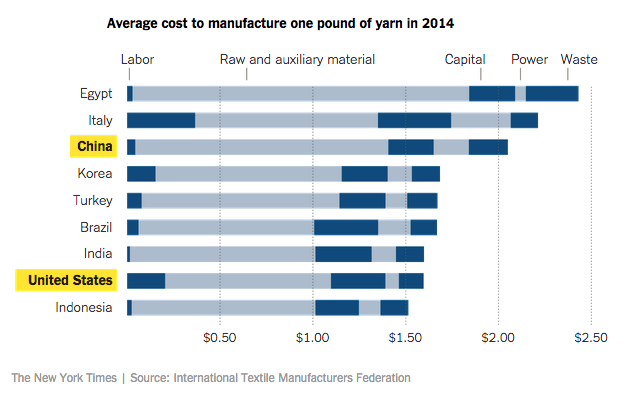 Some Humor and Insight About Highway Congestion

What Ants Tell Us About the Wisdom of Crowds