What We Can Learn from Venezuelan Inflation

In 1990, when the value of Brazil’s real plunged daily, supermarket shoppers rushed to the store just as it opened. Their goal was to beat the repricing clerks and grab the groceries that were not yet more expensive.

The problem was an out-of-control price system. At 80 percent a month, Brazil’s inflation rate meant after 30 days you needed 180 reais for the original purchase. And after a year, the price would have skyrocketed to 115,683 reais. You can only imagine the havoc this hyperinflation created.

Now, Venezuela has a similar problem. During November 2014, Venezuela said its annual inflation rate for the bolivar was 64 percent. More accurately though, Johns Hopkins professor Steve Hanke says the increase is 510 percent.

As a result, on any of American Airlines’ 19 weekly flights out of Venezuela, travelers can no longer use bolivars. American and all other foreign carriers have said online payment requires a foreign credit card. Ford insists its Venezuelan customers use dollars for trucks and SUVs. Against the law, upscale property in Venezuela is sold in dollars.

You can see why. It makes no sense to be paid in a currency that will have less spending power tomorrow and still less the next day.

Where are we going? To deciding what makes money functional.

Saying he will make everyday necessities affordable, Venezuela’s President Maduro retained the price caps established by his predecessor. Targeted goods included toilet paper, rice, soap, milk, meat and coffins. As any economist would have told him, he created shortages. And those shortages resulted in higher prices on the black market or anywhere there were no price caps.

Below, the horizontal purple line represents a price cap. The price cap is called a ceiling because price wants to head up to equilibrium but the ceiling stops its natural movement upward. Crossing the supply curve before it hits demand, the ceiling creates a shortage that typically leads to high prices. 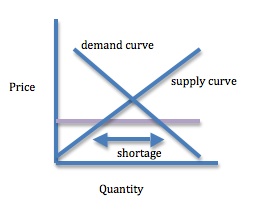 Compounding the problem is the plunge in oil prices. With Venezuela having less oil money and more inflation everyday, it has insufficient power to buy other currencies that would enable imports.

The result? No McDonald’s French Fries… Because they are imported. Instead, McDonald’s said Venezuelans could order a Big Mac and “arepa” corn pancakes.

It takes three characteristics for any commodity to function as money:

When hyperinflation strikes, people abandon a currency because it no longer retains value.

How Congress Would Anger Alexander Hamilton