The Mystery of Why Grads From 4 Year Colleges Earn More

After studying accounting and finance for three years, Mick Jagger left the London School of Economics. With his childhood friend Keith Richards, he planned to work in a new band. For Jagger, leaving college in 1963 was a good decision.

The rest of us, though, need a college diploma to earn more. Graduates of four year colleges have higher earnings than students who never finished, never started or attended a community college. For 2013, the NY Times says grads earned a whopping 98 percent more than individuals without that degree. While other estimates are closer to 10 percent for each year of school, whichever we accept, still, the gap is big. 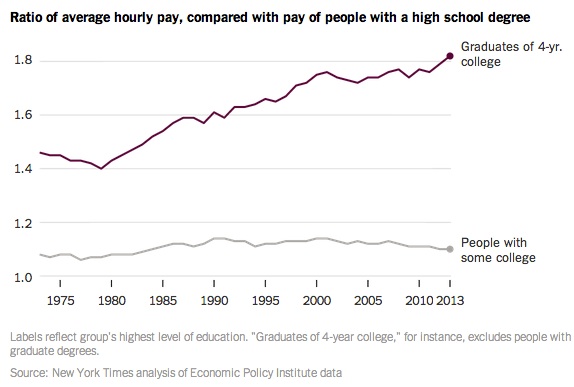 Our mystery is why. Why does that four year degree create a wage premium?

Better Capital or Better Signaling or Something Else?

The traditional view is that we learn skills during four years of college. Attending classes, taking exams, reading and doing research, we acquire thinking and writing skills. Correspondingly, our major determines the technical expertise with which we will graduate. Put it all together and you get human capital growth that makes a graduate much more valuable than a freshman.

Yes? Not according to some economists who are looking at signaling.

The signaling people say that college graduates’ labor market attractiveness comes from showing they could graduate. Being able to get that diploma means you have many of the skills you will need when you enter the labor force. You have to go to classes on time, pass exams, stick with a goal for 4 or 5 years and display perseverance. Students lacking the qualities they need to finish a four year college are “filtered out.” Consequently, one leading advocate of the signaling model says the split is 20/80. 20% human capital and 80% signaling.

And then, we also have a third group. In one study, researchers looked at students who were admitted to an elite university but attended a state school. Their earnings equaled what they would have been as “elite” school graduates. Does that mean we also have a group of people–no matter where or if they attend college–whose individual attributes bring them success?

Resembling fractal mathematician Benoit Mandelbrot’s observation about the British coastline being infinite when we look closely, causation between a college diploma and higher income involves an incalculable number of variables. Scholars are continuing to debate whether human capital development, the signaling of the diploma, or pre-existing human talent is most responsible for the college wage premium.

So yes, college is worth it. But the mystery is why.

The Mystery of the Disappearing Workers

The Mystery of the Missing Marijuana Money