The Robots Are Taking Over! (Our Most Mundane Jobs)

Imagining the next half century, Americans told Pew Research the inventions they hope (and some expect) will enter their lives. The one innovation I most liked was the personal robot servant. Named by eight percent of respondents aged 30-49, the personal robot was on a list that included wearable implants and devices, drones, driverless cars and even “teleportation” through which we can abandon our planes and trains.

From Pew, this table provides some idea of what people were contemplating: 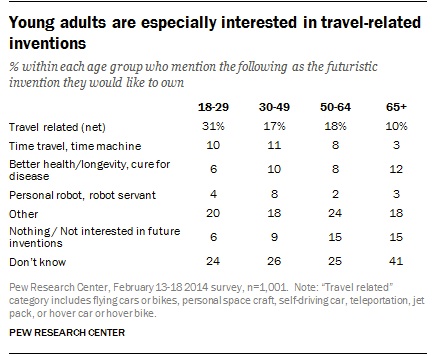 Where are we going? To the impact of technology on jobs.

With machines playing a larger role in our lives, work will become very different. Described in “Lousy and Lovely Jobs,” automation creates polarization. The jobs we wind up with are “lovely” at the top because they involve cognition, variety and high pay. At the bottom, the “lousy” low paying jobs that will remain require “non-routine” manual skills.

Meanwhile, the middle shrinks. Documented as having already begun to happen by MIT economists, middle income jobs are being replaced by automation. The arrows, below, indicate the extent to which the relative numbers of specific jobs have gone up or down. 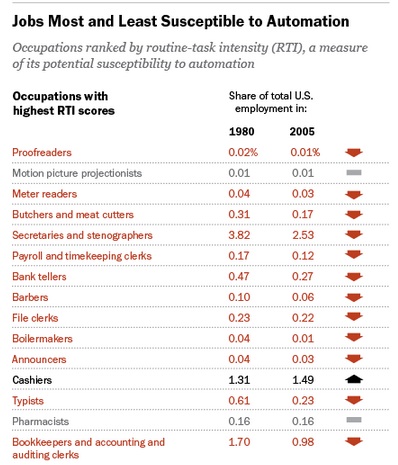 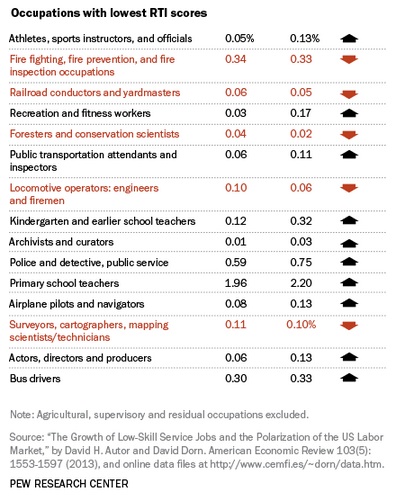 Asked about the common denominator for job increases and declines, the authors of the study say that routine is the reason. More routine means more of a chance of being replaced by a machine. Then, looking at specific jobs, they conclude that middle income earners are hit the hardest by automation because of their jobs’ repetitive patterns. The result is a polarized labor force dominated by “lovely” high paying and “lousy” less lucrative jobs.

With an increasingly larger hole in the middle that is occupied by machines, the U.S. labor force will become more polarized. But, instead of a skilled and unskilled divide, we wind up with routine being the key variable.

The Downside of Cheap Oil

It Ain't Easy Being Pretty