How to Build a Better Bridge

Politicians have decided to spend $1.3 billion on an 83 year old bridge between Staten Island, NY and Bayonne, NJ.

Because the Panama Canal is the reason, $1.3 billion makes sense.

During 2015 or perhaps later if construction delays continue, the Panama Canal will be wider. An expanded Panama Canal means newer bigger ships can use it to travel from Asia to the US East coast. Called Post Panamax, these gargantuan cargo vessels are 54 feet wider and 235 feet longer than the last generation of large ships.

The problem for the Bayonne Bridge is that the Post Panamax cannot squeeze below the roadway. Even now, some large ships have to fold their masts and wait for low tide before crossing. With an opportunity cost of $20 billion in cargo from Asia that would be sacrificed, the NY and NJ Port Authority said, “raise the bridge.” 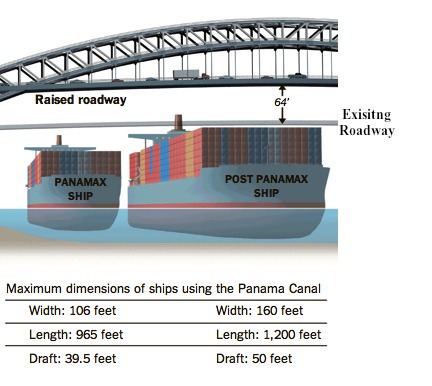 But how do you raise a bridge?

Planners say that traffic will continue to cross the bridge during the project. First they will demolish the 2 lanes heading eastward and “insert” a part of the new roadway higher up. At the same time, the westward lanes will become 2-way. Once the newly elevated lanes are secure, cars can use them and then the lower west lanes will be eliminated. Including a pedestrian/bike path, medians and wider lanes, the new bridge will far surpass its older self.

In 1931, the Bayonne Bridge was considered an engineering marvel. It cost $13 million to build–the equivalent of $200.8 million today (the BLS inflation calculator)– and it won the “Most Beautiful Steel Bridge” prize. The 2014 “raise the roadway” project is also state-of-the-art.

Our bottom line here is opportunity cost. The project was approved because no one wanted billions in cargo to go elsewhere. On the other hand, throughout the US, we are told we have a crumbling transportation infrastructure that needs attention. Again opportunity cost is the reason but this time for our inaction. Certain projects might require too great a sacrifice.

Sources and Resources: The best description of the “raise the bridge” project was at the NY Times while the NY and NJ Port Authority had additional detail, especially on the history of the bridge.

because an expanded Panama Canal

Eight Technologies That Will Destroy and Create Businesses

2 Reasons We Don't Go to the Movies