Hoping to cut costs at the pump and buy less foreign oil, President Obama said in his 2014 State of the Union address that medium and heavy duty vehicles would be the next target. A part of the CAFE mandate that started with 1975 legislation, Corporate Average Fuel Economy miles per gallon (MPG) goals are ascending.

Described by Car and Driver, the MPG goals have been individualized. If a car’s “footprint” (wheelbase times tire tread width) is larger, its MPG requirement will be less than for a smaller vehicle. But then, footprints can be averaged so auto manufacturers might have cars that exceed the requirement enabling them to make others that are gas guzzlers. As an average, the goal is 35.5 for 2016 and 54.5 miles per gallon by 2025. So auto manufacturers have the incentive to produce hybrids, cars with more efficient gas mileage, electrified vehicles and lighter cars. 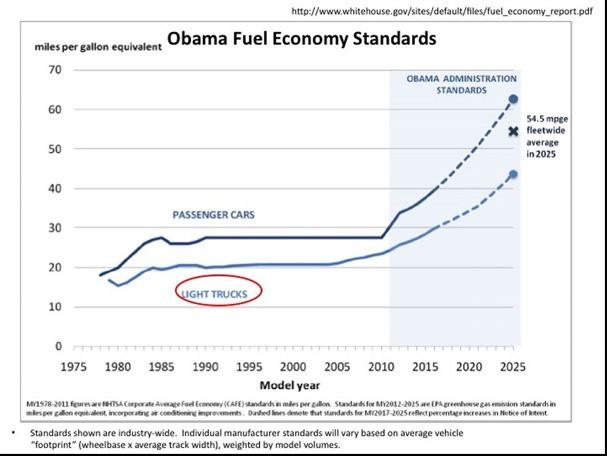 However, it’s never as easy as it sounds.

Because CAFE creates cheaper driving, we will have the incentive to use our cars more. Referring to the energy efficiency created by the steam engine, 19th century economic thinker William Jevons said the rebound effect would kick in. As he explained, “It is wholly a confusion of ideas to suppose that the economical use of fuel is equivalent to a diminished consumption. The very contrary is truth.”

To meet the CAFE mandate, car makers will have the incentive to design lighter cars. According to economist Mark Jacobsen, when weight drops, more people die in auto accidents. So we might save, for example, 1.7 billion gallons of gasoline from driving lighter cars. But we create 2000 extra traffic fatalities.

As one Ford executive said to Motor Trend in 2012, “Get weight out, improve rolling resistance, get better aerodynamics, get rid of parasitic losses in the system and squeeze as much efficiency as possible  out of your power trains…We can figure out how to do it, but it will be costly…”

So yes, taking the next step with CAFE mandates could indeed make filling our tank much cheaper. But the tradeoffs could take us to a vast array of unintended consequences.

Sources and Resources: For more on the cost benefit tradeoff between CAFE and gas taxes, this Eduardo Porter article is excellent as is this New Yorker article that discusses the “rebound effect.” In addition, the specifics of CAFE standards are described further by the NY Times and an NHTSA press release. For the auto maker perspective and the above graph, Car and Driver and Motor Trend were a bit dated but good for the cost side. And Dr. Jacobsen’s 2011 paper and also his much shorter article from the American Economic Review provided the academic perspective.

Please note that several sentences have been excerpted from previous econlife posts on CAFE.

A Big Problem for Libraries