Why $195 Million Was A Disappointing Price

Monday, at a Christie’s auction, Andy Warhol’s “Shot Sage Blue Marilyn” sold for approximately $195 million. Sometimes called the 20th century Mona Lisa or the pinnacle of Pop Art, the painting went to a “mega” art dealer for less than the $200-$400 million many of us expected. It is one of a series of five, including red, orange, and turquoise versions.

The bidding ended in less than four minutes. Do take a look:

Previously, the top auction price for an American artist was the $110.5 million paid for a Jean-Michel Basquiat canvas of a skull:

The supply side of pricey contemporary art markets includes artists, private collectors, museums, and dealers. To elevate price, they hope to convey a reputation that gives bidders signals about value. The markets that determine price have been called “opaque” because a painting is a non-standard good whose value can be based on a socially created reality.

Meanwhile, on the demand side,  buyers can be aware of a slew of variables that range from prior sales to prevailing taste. In addition, the “masterpiece effect” increases the price of a painting if the artist is famous as might the “death effect” after an artist dies. And, beyond the art world, the financial health of the economy can propel prices up or down.

Below, the years after 10 artists’ death are plotted with the average price of their work. You can see the connection for Andy Warhol. At 59, Mr. Warhol unexpectedly died: 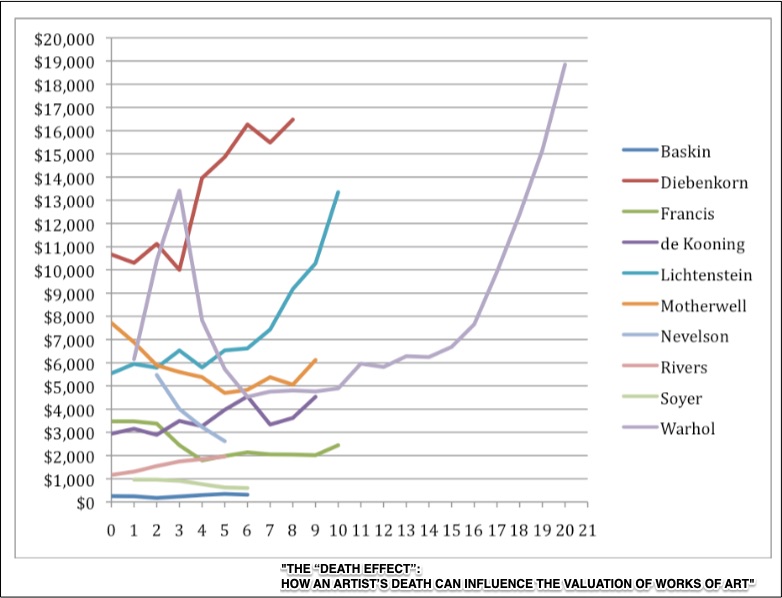 In a market economy, price provides information. We know, for example, that a $10 t-shirt might not be well made. However, in art markets prices can be less dependable. For example, auction observers asked why Asian and Middle Eastern buyers were quiet. They also wondered how recent stock market turmoil affected the bidding.

Still, our bottom line is a $195 million price and the message it sends.

My sources and more: Each slightly different, Axios, Artnet, the NY Times and the BBC all had the auction facts. Most crucially though, through my former student Alanna Butera’s paper for Sotheby’s on the death effect, I learned how paintings are priced. Please note that today’s post was an update of a 2020 auction from econlife.

When We Need a Better Name

How to Hide a Price Increase