What the Big Mac Says About Inflation

With hungry steelworkers to feed, the owner of the Uniontown, Pennsylvania McDonald’s needed something better than (what he described as) a puny cheeseburger. His solution was a double-decker burger. The McDonald’s HQ executives said it was okay…only if he used no new ingredients. Still, he reputedly snuck in a sesame seed bun from a local bakery. And the rest of the story is history.

According to McDonald’s menus, a Big Mac would have cost us approximately 45 cents during the 1960s. Hopscotching among decades, we have the 1970s Big Mac at 65 cents and then $1.60 during the 1980s. I am guessing that the leap was because of the last great inflation during the early 1980s. (According to the National Restaurant Association, at 7.2 percent, the 12 month April to April jump in average menu prices was the most since 1981.) 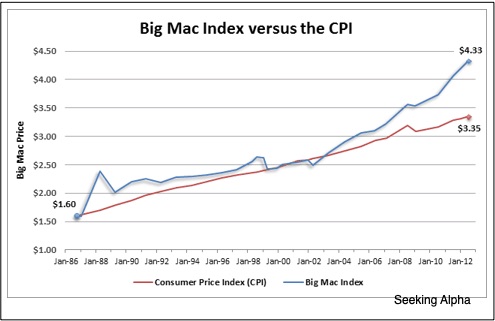 Now again, Big Mac prices are rising. The CPI’s inflation calculator tells us that last month we needed $6.11 for that January $5.94 burger, fries, and a soda. And indeed, the average current U.S. price of a Big Mac meal is $6.05: 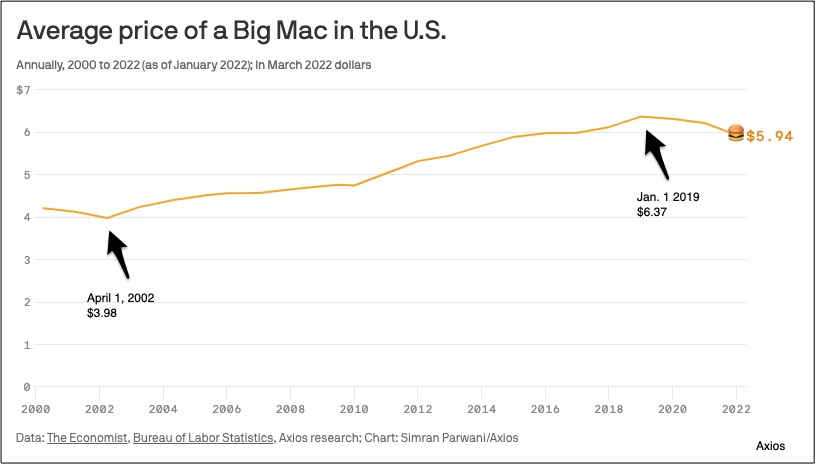 Although the company won’t say for sure, it appears likely that soon we will be paying more for the Big Mac.

Containing beef, cheese, and wheat, a Big Mac is a good barometer of food inflation. Less obvious but also in the bun, we have the cost of labor (rising), of transportation (rising), and tariffs:

My sources and more: Thanks to Statista for the email that led to today’s post. From there, my Big Mac history came from here, here, and here  Our featured image is from Insider while the Visual Capitalist had the most compelling price history graphics. Then, this industry website reported the rising price of cheese while the BLS has it all. (Please note that today I could use some help. None of my Big Mac price history sources distinguished between the burger alone and the meal. Please let me know if you disagree with my conclusions. Thanks!)

May 2022 Friday's e-links: When a Crypto Peg Did Not Work