An Unexpected Carbon Footprint at the Global Climate Summit

The planners of the Glasgow global climate conference promised that the event would aim for a low carbon footprint. Yes, they had low-flush loos and re-usable coffee cups.

But it did not work out quite as they expected.

The goal for Glasgow was carbon neutrality. Instead, at double the emissions during Madrid and Paris, and quadruple Copenhagen, Glasgow far exceeded previous summits. They had tried to encourage mass transit with free passes and served more plant-based food. They also focused on sustainable water, energy, and refrigerant use. But still, the preliminary total is 102,500 tons of carbon dioxide, equal to what 10,000 U.K.households would annually emit.

At a projected 60 percent of emissions totals, the big culprit is probably aviation.

Carbon counters at the Daily Mail tried to estimate the private jet traffic to the conference. Including the 41 planes they identified on November 2 between 2 p.m. and 11 p.m. (below), their totals are close to 400: 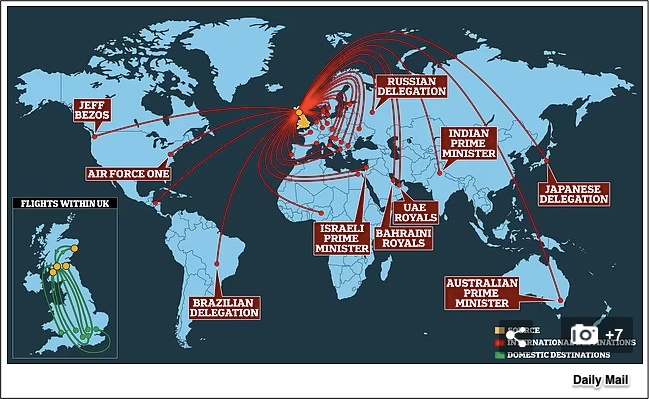 Boris Johnson arrived and left on a private jet. His office explained that he had come from the Group of 20 meeting in Rome and then had to get back to London quickly. However, for a return trip to the conference, he took the train. Perhaps an offset, Leonardo DiCaprio flew commercial. If it was coach, he would have emitted somewhere close to 700 kilograms of carbon dioxide for 3,293 miles (5299 kilometers). Flying private would have emitted 10 times as much.

In so many ways, Glasgow’s shortfall demonstrates how tough the climate battle will be.

The hierarchy of strategies that shrink a carbon footprint start with “Avoid” and continue to “Reduce”and “Replace.” However, if all three underperform, the last alternative is “Offset.”

In the past, offsets have included paying for better cook stoves in India and methane capture in Vietnam. The price tag averages approximately $7.50 a ton. That would mean Glasgow’s planners would need a check for $768,750.

My sources and more: The Washington Post had the story of the conference carbon footprint as did The Daily Mail. Then, “The Carbon Management Plan” had the details.

Edison, Tesla, and the History of General Electric