Pop star legend David Bowie (1947-2016) was the first person to sell bonds based on his future royalties. Now again, he is making money for investors.

Similar to silly putty, the aircast, or the moving assembly line, the first Bowie Bond was an innovation. David Bowie just had to sell the rights to future royalties which then were used to back a $55 million bond issue. The issue paid 7.9 percent interest, was self-liquidating (so no principal due at maturity), and Mr. Bowie received a pile of cash.

Now, David Bowie’s estate is selling his songwriting catalog, perhaps for $200 million. Representing the ownership of his copyrights, the catalog can then provide an income flow for decades or be used to create other investing vehicles. Sony paid singer-songwriter Paul Simon $250 million for his music catalog.

You can see below that Bob Dylan topped the Paul Simon sale: 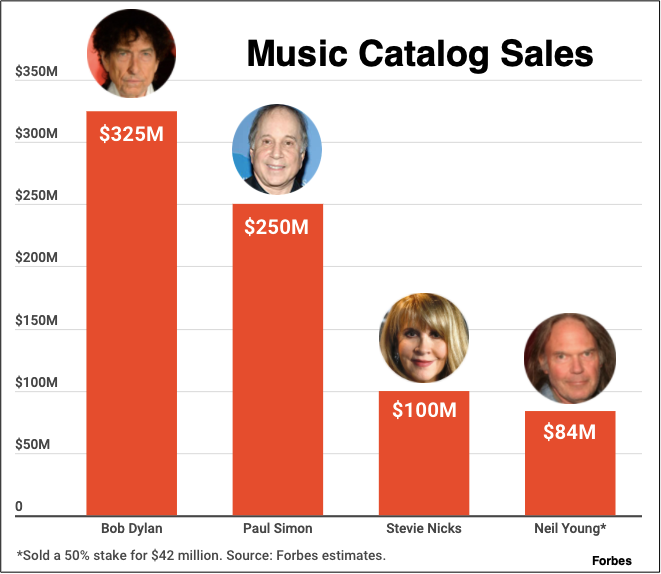 Referring to Bowie Bonds, investment bankers would say that they were securitizing a cash flow. But all they really did was create the IOU that we call a bond. Investors provided a $55 million (or so) loan for which they received a 7.9 percent coupon (interest) during 10 years. The cash flow that funded the bonds until they matured came from the music royalties.

Wall Street bankers securitize countless commodities. CDO (collateralized debt obligations) can be composed of a collection of our mortgages. Their cash flow comes from our payments. You know what happened to them. The income flow collapsed by 2008 and fueled the Great Recession.

My sources and more: One source for our first post on Bowie bonds was this Forbes article.and FT. Then, FT described the newest Bowie financial instrument and Forbes had the graphic and facts on catalog revenue.

Our Weekly Economic News Roundup: From Quit Rates to Pop-Tarts

All You Could Ever Want to Know About a Pumpkin Slingshot