How to Look at Infrastructure

The Donners and the Reeds led what was supposed to be your average 1840s wagon trip from Missouri to California. George Donner was a well-to-do landowner. James Reed was able to equip his wagon with multiple decks, a working stovetop, and two servants. The two families traveled with approximately 80 people.

The Donner Party became a legend. Stranded in the Sierra Nevada Mountains during a frigid winter, they reputedly resorted to cannibalism. There were 45 survivors.

Historians Heather Cox Richardson and Joanne Freeman tell us that the Donner Party was one of many reasons that mid-19th century politicians expanded the nation’s transportation infrastructure. They realized that people’s safety and commerce required a transcontinental railroad. And thus we wound up with a Golden Spike at Promontory Summit Utah where the East’s Union Pacific met the West’s Central Pacific Railroad in 1869.

Long before and long after 1869, we have been concerned with infrastructure.

Today we need to ask if it’s hard or soft or both.

We could say that our transportation infrastructure began when representatives from Maryland and Virginia met in 1785 at the Mount Vernon Conference (yes, the meeting was at George Washington’s home.) to rationalize Potomac navigation. The result was a 13-point document that proclaimed the river was a “common highway.” From there we can jump to a 19th century Clinton who lived in New York. As governor, George Clinton jumpstarted East West commerce by building the Erie Canal. Connecting Albany and Buffalo NY in 1825, it became easier and cheaper to ship manufactured goods and crops between the East Coast and the Midwest. After that we have privately constructed railroads that were supported by government subsidies. Then, skipping a century, we can leapfrog to the highway system built during the 1950s, and to the motels, restaurants, and suburban communities that grew up around it.

For a contemporary infrastructure definition, we can look at what the U.S. Congress is considering. One proposal is mainly physical capital, Composed primarily of roads and highways, bridges, tunnels, ports, and waterways, in addition, it allocates funding to clean-energy projects.

As you can see in this Washington Post graphic, the Biden proposal also has a people-focused soft infrastructure: 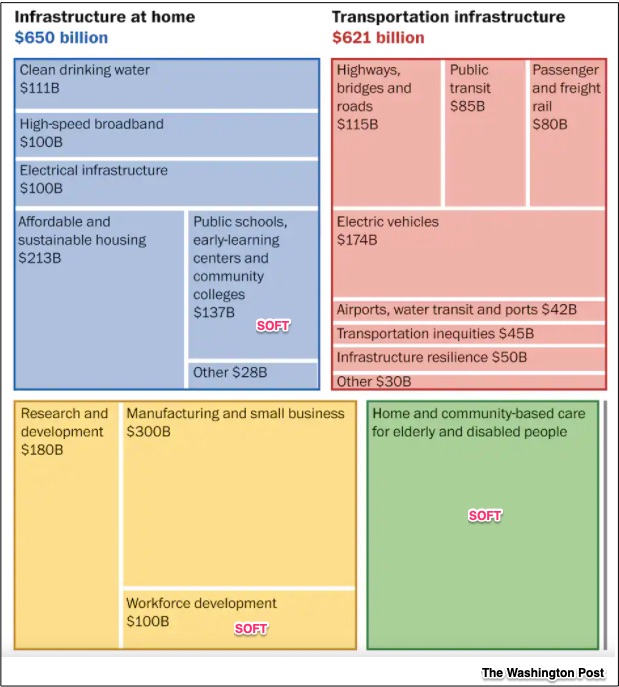 Infrastructure can be physical and human. We have always said that bridges and pipes are examples of our hard infrastructure. But infrastructure also has a soft side. It includes the childcare and eldercare that let us work more efficiently. Whereas traditional infrastructure has expedited travel and communication and finance, so too does the soft infrastructure that lets us do our jobs. And, with more women in the job force, it is increasingly vital.

My sources and more: Thanks to Heather Cox Richardson and Joanne Freeman for making yesterday’s walk more pleasant. I especially enjoyed their podcast on hard and soft infrastructure history. Their link took me to the Donner Party. Next, fast forwarding to now, we can look at The Washington Post summary of legislative proposals, here and here. And finally, if you (like I) needed to ponder soft infrastructure, this article is ideal. Our featured image is from the Atlas Obscura story of the Donner Party.

Why We Need More Wikipedia Women

When More Is Less at the Supermarket