“Can’t pay” Google searches have been way up:

Last week, at 3.3. million, jobless claims were at a mind boggling historic high. Except for essential businesses, in many U.S. communities commercial activity has shut down. Most of us wonder if a recession has begun. We are asking if we have made a tradeoff between our health and our job.

Through an IGM forum (The Initiative on Global Markets) created by the University of Chicago’s Booth School, we can compare 41 economists’ opinions on the policy response to the coronavirus. The group is geographically diverse. Their political biases vary, they are old and young, and they specialize in different areas. All have auspicious scholarly credentials. They teach at elite research universities, they’ve received top economic honors.

An “uncertain,” response indicates they believe the facts are ambiguous. “No opinion” means they don’t have the expertise in that area. Otherwise, they submit comments and, as you will see below, whether they agree or disagree with the statement.

There were three questions. Our graphs are all from IGM.

The first question asked whether we can expect a large decrease in economic activity until the virus’s spread shrinks considerably. You can see that the vast majority either strongly agree or agree: 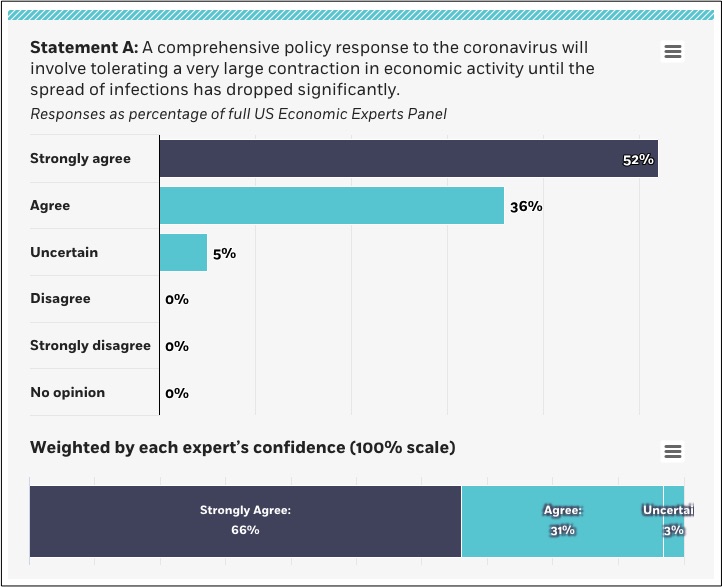 The comments that accompanied the survey response were varied. Yale’s Larry Samuelson said, “We have already seen one of the quickest and most severe contractions in history, with no immediate end in sight.” A bit more optimistic, Stanford’s Kenneth Judd expects that, “Yes, there will be a ‘very large’ contraction, but with a short duration, hopefully just several weeks.” Meanwhile, Northwestern’s Christopher Udry occupied a middle ground with, “There are many steps we can take that both will reduce the contraction and reduce lives lost. Most obviously vastly improved testing.”

A second question asked economists if they thought abandoning lockdowns before the virus subsided would lead to more economic damage than if officials waited for a longer time period. Here again, we have a majority agreeing but there were more uncertain replies: 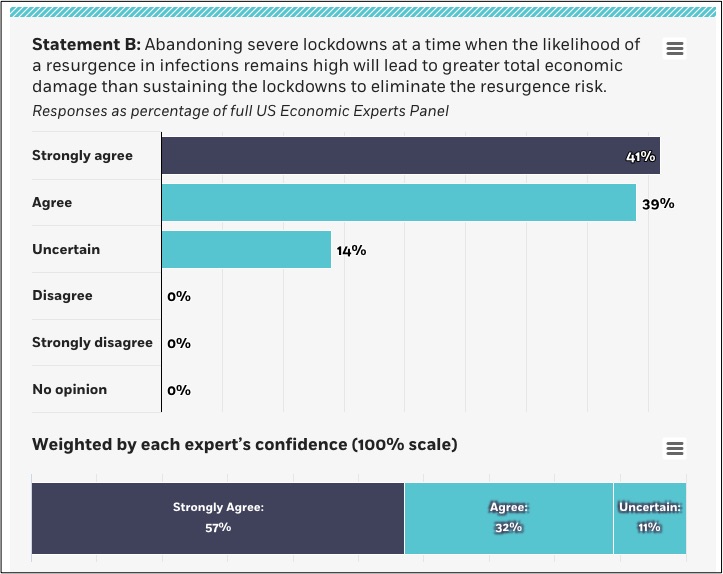 Most who agreed believed that, “Everything I read suggests that premature cessation will backfire…” Some included a concern about the multiple waves that could return. Two others said inadequate data prevented them from providing an informed policy response.

Responding to the third question, almost all believed the government could do more. It appeared not to matter if your economic predisposition was liberal or conservative: 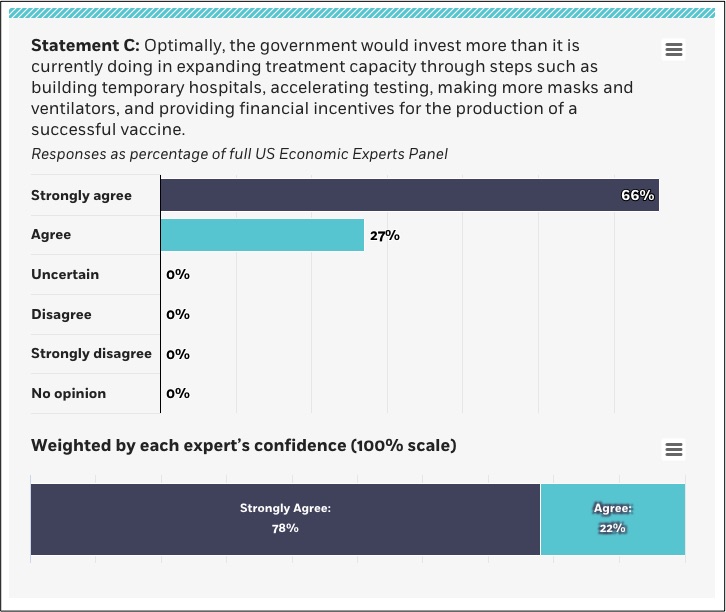 Thinking about virus economics, many of us suggest that we are choosing between what is best for our health and what will support the economy. But economist Austin Goolsbee says there is no tradeoff. “Anything that slows the rate of the virus is the best thing you can do for the economy, even if by conventional measures it’s bad for the economy.” Spending more on medical products supports prevention and treatment while also boosting the GDP. Similarly, paid leave and unemployment assistance provide precisely what we need now. We do not want people to go to work.

Rather than a tradeoff, a sustained lockdown and the safety net can be a springboard for a resurgent economy.

My sources and more: Every once in awhile, it is so interesting to check on the economic consensus at the University of Chicago IGM Forum for contemporary issues like virus economics. For more of the false tradeoff do read this IGM essay. But also, if you believe there is a tradeoff, you will get some validation through this audio debate.

Please note that part of our description of the IGM Forum was in a previous econlife post. Our featured image of empty chairs near NY’s Hudson Yards is from The Guardian.

The Problem With Cheap Oil

The People Who Live Together During a Lockdown