The Beer That No One Wants to Buy

In restaurants, bars, hotels, and stadiums, there are somewhere near one million kegs of craft beer that no one wants to buy. In Idaho, one farmer had two million potatoes that his customers no longer wanted. Both stories are somewhat similar.

Before St. Patrick’s Day and March Madness, the craft beer supply spikes. Preparing for the increase in demand, retailers and distributors accelerate deliveries. They also get ready for the baseball season, soccer games, and other summertime athletic events. Now though that pandemic lockdowns eliminated the events and normal consumption, they have a problem. They have to decide what to do with beer that might spoil in two to six months.

Environmental authorities say the beer can’t be poured into local waterways because it creates bacteria while upsetting ph and oxygen levels. Only after it is defoamed, treated, and then chemically tested, can it be dumped. Alternatively, some could be made into hand sanitizer or used for gasoline after the ethanol is recaptured.

One concern is who pays if the beer goes bad or has to be reprocessed. The big distillers said they and their distributors would absorb the cost. The goal is to cushion the hit to the restaurants and bars that serve  their consumers.

Somewhat similarly, do consider what it means for us to stop eating McDonald’s fries. Closed because of lockdowns, McDonald’s, Burger King, Wendy’s, and others like them no longer need their potatoes. Following the supply chain backwards, we could wind up at Cranney Farms in Idaho. Many of the billion or so potatoes that Cranney plants and harvests each year won’t be delivered. Because of contracts with the large fast food chains, those potatoes are in storage.

Cranney Farms also has unsold potatoes that they’ve decided to give away. Hoping to help people who need food, they’ve been deposited in a two-story high mound. Individuals whose families needed potatoes, representatives from food banks, shelters, elderly homes, anyone who could use some extra bags arrived. Cars, from as far away as Kansas, lined up.

This is the Cranney potato pile: 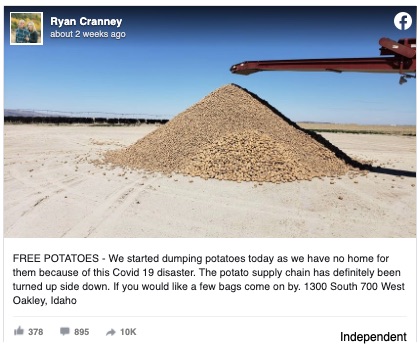 Still, Ryan Cranney has not figured out what to do about all of the eating establishments that mainly use his potatoes for french fries. Questions remain about who will pay and what to do if they rot.

Defined economically as limited quantities, scarcity is the basic economic problem. As a result, economic systems like the market produce and distribute “scarce” goods and services.

And that returns us to beer and potatoes.

The beer and potatoes that millions of households want and need are being produced. However, the coronavirus pandemic has created supply problems. Because some producers target retailers, it has been tough for them to pivot to you and me.

My sources and more: It’s always nice when two sources form the perfect complement. Today it happened with a podcast from The Indicator  and a WSJ article. Instead of the podcast, though, if you want to read about the potato giveaway, do go to the Independent.