Where the Little Dribble is Big Business

In Japan, adult incontinence products have outsold baby diapers since 2013. Having a bit of fun, one leading seller, Unicharm Corp, markets its pads with the phrase choi more–“lil’ dribble.”

Where are we going? To the retail impact of an aging population.

In Japan, Curves has been called the gym for grandmas. Aged 64, its average member might do a leisurely walk on the treadmill, go to a tai chi class, and then head for a hot bath. Instead of some fast paced Zumba, gentle stretching is popular. At one Japanese fitness club, each day, the friends of a 91-year old-woman help her navigate the steps that lead to the entrance. Another said she could no longer reach a higher locker because her back had curved too much.

Reflecting their new demographic, some fitness clubs report that the hot bath has been named their second most favorite activity.

Catering to the Elderly

Catering to an aged cohort that no longer drives, Tokushimaru has been bringing the store to the person, Their mobile supermarkets carry a 400 product selection with a total of 1400 items on a single truck. Instead of the traditional store, their 470 trucks have been called a supermarket chain, They project 1000 in two years. 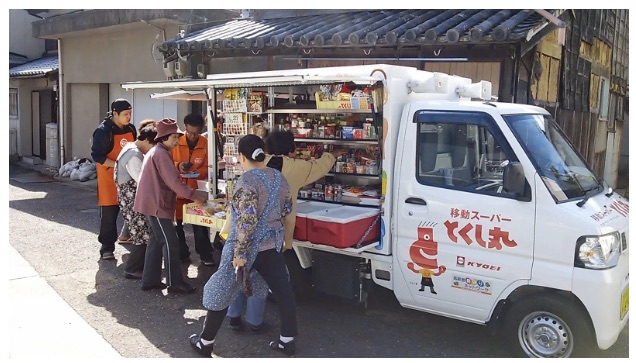 In an eastern Tokyo neighborhood where 44 percent of the population is aged 65 to 74, the bookstore, bakery, cafe, and gym all open at 7 a.m. At a sporting good store you can get an early bird discount and elsewhere, a stylish cane. Meanwhile, the escalators might be slower, the aisles wider, and a walking track could encourage early morning get-togethers.

Our Bottom Line: An Aging Population

The elderly in Japan are now close to 30 percent of the population. The average Japanese women lives to 87. A Japanese man typically has an 81 year lifespan. Both usually have good health into their seventies.

Led by Japan, proportionally, these 29 countries had the largest over 65 population in 2019. The top five were Japan, Monaco, Italy, Finland, and Greece:

As economists, we can cite a shift in consumption expenditures when, like Japan, retailers will surely respond to an aging population.

My sources and more: If you are interested in what the aged are buying, this WSJ fitness club article is a good start. From there, the Japan Times described the incontinence market while the Nikkei Asian Review detailed grocery stores on wheels.

Why Some Wine Drinkers Are Drinking Less (And Others Are Not)

Everything We Need to Know About Global Economic Risk