What Economists Say About Roller Coasters

For years, a urological surgeon (and Michigan State emeritus professor) had been hearing that people returned from Disney World with fewer kidney stones. But after one man said that he passed a stone during each of three visits to Big Thunder Mountain Railroad, the doctor decided to check it out…scientifically.

So, he used a 3-D printer to recreate the man’s kidney. Then, he filled it with urine (his own) and three kidney stones.  Ready for the experiment, he put it all in his backpack and flew to Orlando. At Disney World, he first described the experiment to guest services and got their okay, The basic plan was to hold the backpack “at kidney height” and see what happened to the stones after the ride. Sitting in the front and the back of the roller coaster, he found the stones “passed” 64% of the time in the back and 17% when in a front seat. (I guess you bounce more in the back.)

Since we spend close to $3.8 billion a year treating kidney stones, we could say his research was also economic. Defined as sacrifice, the financial and psychological cost for eliminating a small kidney stone could go way down. You just need to ride in the rear of a roller coaster.

10. Especially good at pricey engineering products, Liechtenstein and other European nations have a comparative advantage for making roller coasters. 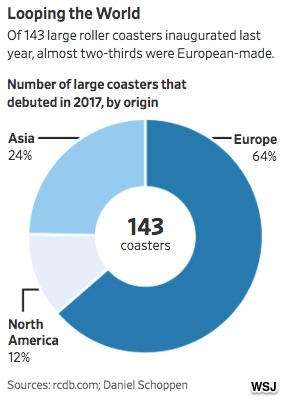 9. Firms based in Liechtenstein have charged as much as $20 million for a roller coaster because there are few economies of scale. Each of the world’s best roller coasters is unique.

8. However, producers do worry about competition.  It used to take five to ten years to copy a new idea. Now, because of computers, knock-offs take two to three years.

7. Designing new roller coasters, there is always a tradeoff between safety and thrills.

6. On the thrills side of innovation, height is one goal.  The world’s highest, Orlando’s Skyscraper roller coaster, will rise by more than 500 feet.

4. Since the best roller coasters come from Europe (according to WSJ), they do affect the U.S. balance of trade.

3. Yet, since amusement park spending is way up, roller coasters also add to the GDP. 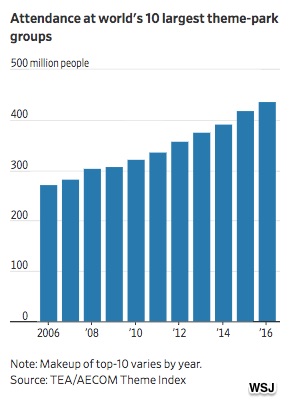 2. And of course the roller coaster queues remind us that amusement parks could be ignoring supply and demand when they select too low a price.

But..my top reason for saying that roller coasters are all about economics is that they can even diminish the cost of a kidney stone.

My sources and more: I recommend this WSJ article for even more roller coaster details. Then, for the kidney story, The Atlantic was interesting. And finally, if you want additional facts do go to this Interview and this history site.

How to Know If You Are a Millennial

The One Thing We Should Know About Making Sneakers