On July 7, on some drinks, the tab went up somewhere between 5 and 20 cents. Indicating that hot coffees were the target rather than iced drinks, Starbucks did not specify the hike for any specific item. A possible reason? Because it depends on where you live.

Where are we going? To how purchasing power varies in different states.

Where We Spend More 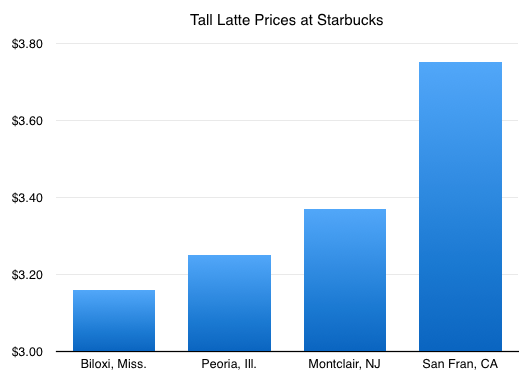 The different prices for a Tall Latte pretty much correspond to the following map from the Tax Foundation. Based on BEA data from the U.S. Department of Commerce, it shows us that your dollar will buy you the most in Mississippi and the least in Washington, D.C. Explained slightly differently, we can say that it takes after tax earnings of $68,000 in Washington D.C. and $50,000 in Mississippi to buy the same things.

With the same Tall Latte priced at $3.16 in Mississippi and a whopping $4.02 in Washington D.C., Starbucks confirms their conclusions. (The difference between NJ and California though is not quite what I would expect. Could it be competition from Dunkin’ Donuts in NJ?)

Where else will Starbucks charge the most? Based on the following map, probably in a yellow state. 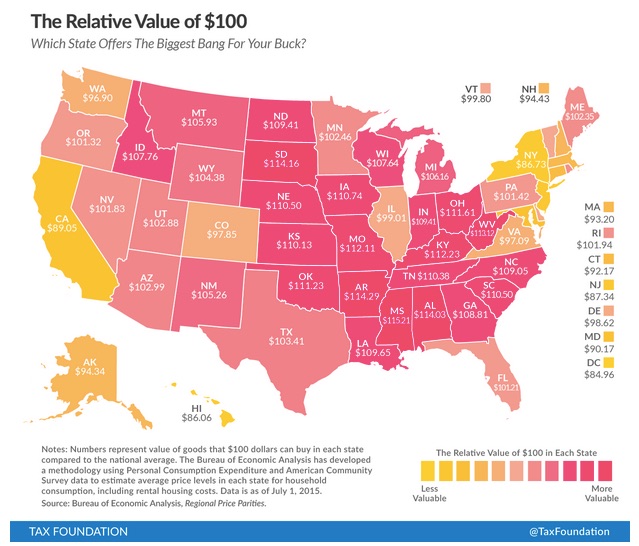 Theoretically, the price of an identical good should be the same everywhere in the U.S. But if that were true, then your purchasing power would be the same in every state.

And that takes us to purchasing power parity (PPP). Called regional price parities in BEA documents, it compares a hypothetical national price level of 100 to local prices. I wanted to include the specific BEA numbers below because they help to understand the tax foundation map.

So yes, living in Mississippi is relatively inexpensive. However, their average per capita income is lower also.

The Cost of a Parmesan Catastrophe