Is the Raisin Reserve “Unraisonable”?

During a Supreme Court hearing last week, Justice Samuel Alito asked, “Could the government say to a manufacturer of cell phones, ‘You can sell cell phones. However, every fifth one you have to give to us?’”

Although his example was cell phones, Justice Alito was really talking about raisins. The case is Horne v. Department of Agriculture.

Where are we going? To how much the government can legally help the economy.

Our story starts in 1937 when the Agricultural Marketing Act was created. A part of the New Deal, it was supposed to maintain farmers’ spending power by propping up farm prices. Raisins entered the picture in 1949 when the 47-member Raisin Administrative Committee was set up.
The problem was raisin demand. After the Second World War ended, raisin demand shriveled because the army no longer needed all of the raisins they were feeding the soldiers. To maintain a higher price, the Committee just had to limit supply.
You can see the USDA plan below. When demand shifted to the left, then raisin prices dropped, 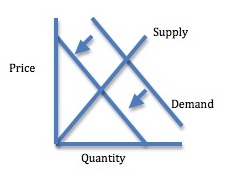 So the raisin reserve just removed raisins from the market, decreased supply and up went price. 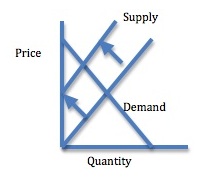 Fast Forward to 2002. Told he would have to deposit 47 percent of his raisin crop–1.2 million pounds– in the raisin reserve, Martin Horne (and several other farmers who joined him) said, “…It’s robbery. It’s socialism. It’s feudalism…” His refusal to participate meant years in the court system and more than $650,000 in fines and fees that he refuses to pay.
Already at the Supreme Court two years ago, they were told to return to the lower courts. Now they are back again and though the case involves multiple issues that relate to property, really it all is about one question. Fundamentally, we are just talking about the power of the federal government to take raisins from their owner.

During 1934, with unemployment high and production low, British economist John Maynard Keynes was reported to have crumpled up a pile of towels rather than just one after washing his hands in a U.S. restaurant. His goal he said (if this really happened and no one is sure) was to create more jobs.

More than what businesses could do, Keynes (1883-1946) believed that a contracting economy needed the job creation that government could provide through deficit financing. Government spending would then multiply as it passed from hand to hand. Just pay a worker, he or she spends that income, the recipient then spends it, businesses have to expand and an inflated total (called the multiplier) of spending enters the GDP.

A part of 1930s Keynesian legislation, the Agricultural Marketing Act and the crop reserves that it subsequently created were the government’s attempt to buoy a sluggish economy by increasing farmers’ incomes. Now, perhaps violating the Constitution’s Fifth Amendment. it might be declared unconstitutional.

This Daily Show segment on the raisin reserve is great for huge smiles. (I could not discover a direct youtube link.)

What Tweets Can Say About the Dow

Weekly Roundup: From Raisins to BBQ