A Surprise in the Federal Budget

As a movie and TV series, Naked City always ended with “There are eight million stories in the Naked City. This has been one of them.”

So too for the federal budget.

This is a story we have already looked at and now have more to tell.

We can start with the $147.3 million a year that the U.S. had been giving to Brazilian cotton growers. We were sending close to $12 million a month because Brazilian farmers protested that the subsidies US cotton farmers received were depressing the world price and givng U.S. growers an unfair advantage.

In 2009, the World Trade Organization (WTO) agreed and told the U.S. to stop. Worried about retaliation that would compromise their business in Brazil, the US pharmaceuticals, movies and music industries entered the battle. To make everyone happy, instead of eliminating payments to U.S. farmers, Congress decided to pay the Brazilians subsidies also.

Now, with a new Farm Bill that President Obama signed during February 2014, the domestic U.S. cotton subsidies that the WTO opposed were (sort of) eliminated. Instead of direct payments that farmers are paid whether they plant or not, they can get crop insurance. Like tradiitonal insurance, you hedge against risk. If cotton prices are too low, insurance kicks in.

The big question was whether Brazil would say that the new crop insurance plans and other subsidy substitutes were simply subsidies with a different name. Rather than give a definitive answer, Brazil said to give them another $300 million. In return, they would drop the case. The WTO said okay.

More technically, the WTO says on its web site…On 16 October 2014, Brazil and the United States notified the DSB that, in accordance with Article 3.6 of the DSU, they had concluded a Memorandum of Understanding, and agreed that this dispute was terminated.

You can see below how the Brazil cotton story fits into the context of a massive Farm Bill.

In this chart, the Congressional Research Service summarized the 2014 Farm Bill. The cotton insurance provisions are a part of the blue slice of the spending pie. 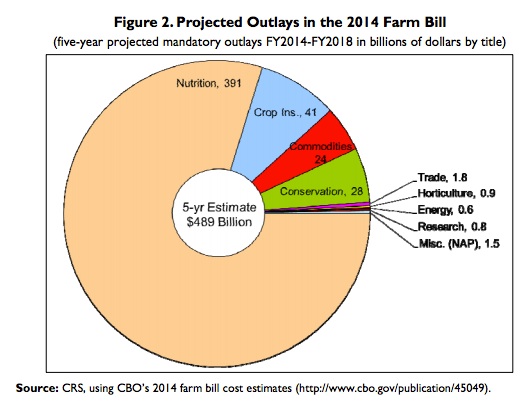 Decreasing the cost of production, subsidies shift the supply curve to the right. Because price decreases domestically, it pulls down the world price of the commodity. As a result, farmers around the world get less for that crop. 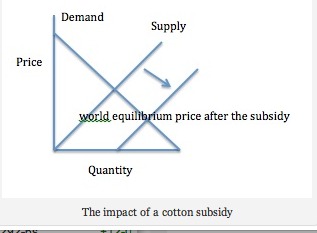 Why It Takes So Long to Board an Airplane

How an ATM is More Than a Money Machine