Harold Hamm is an oil man. The youngest of 13 children, he grew up in a shack without running water or electricity. While Oklahoma is where he entered and built an oil business, the best part of his story is in North Dakota.
Hamm was convinced, and over and over again proven wrong, that there was an oil bonanza beneath the surface of North Dakota’s northwest corner. His initial attempts to unleash the oil from the Bakken formation were minimally successful. He tried horizontal drilling but that did not work well enough. The fracking technique he initially used disintegrated the rock. After more than a decade he figured it out and the oil started to flow–not a gusher–but a respectable amount. Then oil prices plunged and he had to stop. Still, he continued acquiring land, convinced he just had to outsmart and outlast a tough situation.
He did and now, North Dakota has become the second largest oil producing state in the country, behind only Texas. Firms like Hamm’s, Continental Resources, have made North Dakota a growth anomaly.
You can see that, at 9.7%, North Dakota’s GDP growth rate in 2013 far exceeded the US norm: 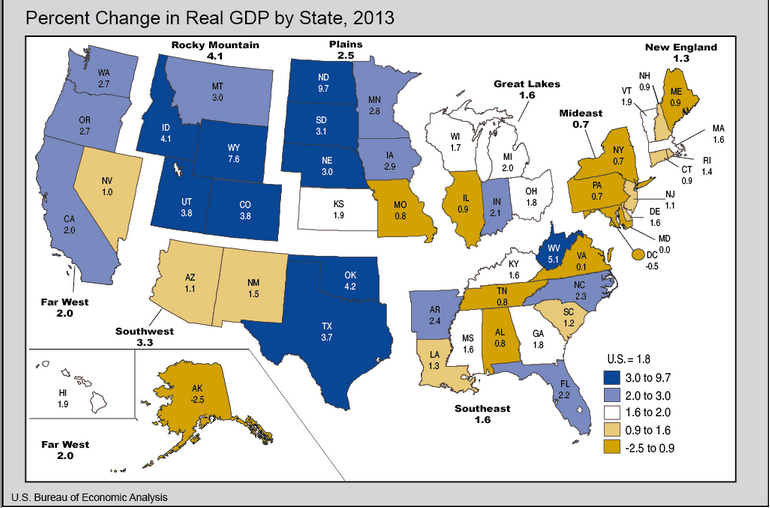 After reading The Frackers by journalist Gregory Zuckerman and listening to NPR’s Planet Money’s podcast about Williston, North Dakota, I realized they were telling 2 sides of the same story. Zuckerman’s was an entrepreneurs’ tale. He focused on the oil men whose personalities were, as he said, part salesman, part geologist and part gambler.
Meanwhile, Planet Money told the story of what it means to be an oil boom town. Leaving their families behind, men move there temporarily to make their fortunes. Walmart had to pay as much as $22 an hour and still could not find enough employees. One trucker made $90,000 a year hauling water to fracking sites. Scarce housing costs as much as in NYC, there are few parks or cultural amenities, and milk is $5.60 a gallon. It is not surprising that the unemployment rate is below 1% in Williston and less than 3% in North Dakota.
Our bottom line: As an economic growth story, North Dakota’s wealth is about entrepreneurs and temporary residents. It is the perfect example of how money and people gravitate to opportunity.