Where Fashion Is Suffering From the Coronavirus

While there was no applause during Giorgio Armani’s Milan fashion show, it had nothing to do with the clothing.

At 4 p.m. on February 23rd, the company live streamed its new collection. Concerned about the public safety, they asked that no one attend. Nearby, the number of coronavirus cases was multiplying.

Although Armani was the only cancellation, fashion had begun to suffer from the coronavirus.

As the country with close to one-third of global luxury revenue, a missing Chinese contingent had to have been a worry. Editors from the Chinese editions of Vogue, Elle, and other major magazines said they had to skip Milan this year. In addition, buyers and other industry insiders from China could not attend.

Meanwhile, a slew of shows were either cancelled or postponed. Burberry, Cartier, and Chinese brands like Masha Ma were no longer going to Paris’s Spring shows. Elsewhere in Europe and Shanghai, fashion houses, watchmakers, and cosmetics manufacturers were changing their trade show plans. At the same time, Chanel said its May date in Beijing was postponed as did Prada for Japan.

The biggest delays though are in the Chinese factories that make our clothing. The reasons, as we saw with garlic, relate to production and transportation. There are the workers who left their jobs for the Chinese New Year and then could not return. We have items like zippers and buttons from subcontractors that aren’t arriving because of the quarantines that have slowed transport. The result is postponed delivery dates that could exceed a month. (I suspect no one is really sure.)

And, we have not even mentioned the impact on retail if fewer people are able to shop.

Explaining how fashion is suffering from the virus, economists would go straight to supply and demand. On the supply side, we saw that the trade show ordering process and production and distribution were all shrinking. Then, affecting demand, stores have closed temporarily in China, in Milan, and wherever there are many coronavirus cases. And now, the slowdown in demand might have reached New Jersey where I was told by retailers at my local mall that traffic is down.

On a graph, supply and demand decrease. After the curves shift, the new, lower equilibrium quantity is where the brown supply (upward sloping) and demand (downward sloping) curves cross: 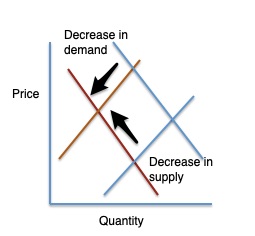 So where are we? Back in New Jersey at a quieter mall after starting in Milan and stopping in China.

My sources and more: Beginning with the BBC and then CNN, I narrowed my lens to the coronavirus impact on fashion. From there, WWD (previously known as Women’s Wear Daily), the NY Times, and Fast Company had the industry details.

Our featured image is from the Armani Milan fashion show.

Why We Want Tubeless Toilet Paper