We know that Republicans and Democrats disagree. A Pew Research Report graphic shows the divide: 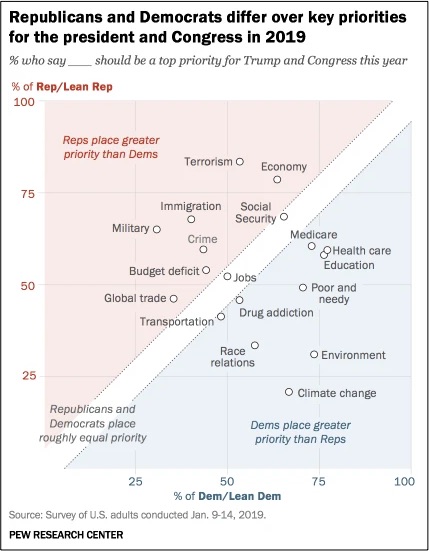 For more insight though, do take a look at what Brookings said about geography and paychecks.

Red and Blue Geography and Paychecks

During just the past 10 years, the political geography has shifted. Increasingly, the Democrats are concentrated in urban areas close to the coast. There might be less blue but those places are much more affluent:

Representing the Democrats, the elevated blue lines display a bigger share of productivity, education, and better paying jobs than Republicans:

In economist Arthur Okun’s Equality and Efficiency. The Big Tradeoff,  we are reminded of the tension between our political and our economic system. As Dr. Okun told us, “Institutions in a capitalist democracy prod us to get ahead of our neighbors economically after telling us to stay in line socially.” We then wind up with a double standard. Our politics are egalitarian. Our economy is not.

By considering the vote in the 2016 election, we can see some of the potential for the tension he describes. Although Hillary Clinton won just 472 counties, her share of the GDP was 64%. Meanwhile, with a 36% proportion of the value of U.S. yearly production of goods and services,  2584 counties were won by Donald Trump: 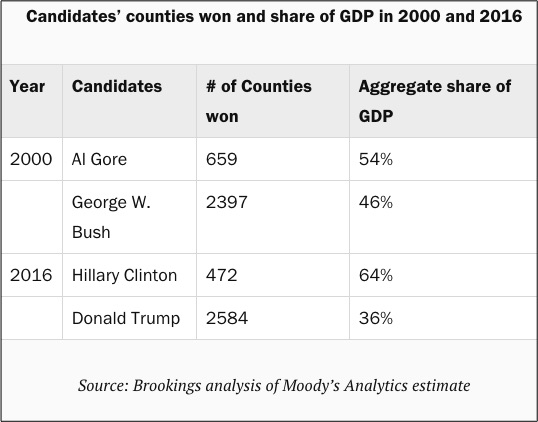 Going back to where we began with the Pew Report, we saw that our political affiliation relates to our economic concerns. If we conclude that at least some of the Republican priorities come from places that Brookings calls left behind, then economic policy should recognize what democracy is saying.

And yet, with America’s two economies pulling in different directions, it could indeed be tougher for politics and policy to move toward efficiency.

My sources and more: Two ideal sources for the facts about the economic side of our political polarization are WSJ and Brookings. Then, Pew completes the picture with its report on how political opinions differ. From there, taking the leap to equality and efficiency, a discussion of Arthur Okun’s ideas is here,

Please note that I use a broad definition of democracy that alludes to our political system although it is not a true democracy.

Why the World Needs Wayfinders