Why We Should Care About Economic Uncertainty

When economists refer to uncertainty, they mean just what we would expect. They are thinking of an inability to forecast the likelihood of an event. Economists care about uncertainty because they believe it can influence consumer spending and business investment. Uncertainty can have a very real impact on economic growth.

The economists who do uncertainty research relate uncertainty and economic activity. They hypothesize that when employers are unsure of future regulations, they postpone hiring and investment decisions rather than risk having to reverse them in the future.

One group of economists created an Uncertainty Index based on words that relate to uncertainty and the economy in ten prominent newspapers. They also quantify temporary federal tax provisions that could change. And lastly, they check for economic forecasting disagreement.

Based on their criteria, they see an upswing in uncertainty: 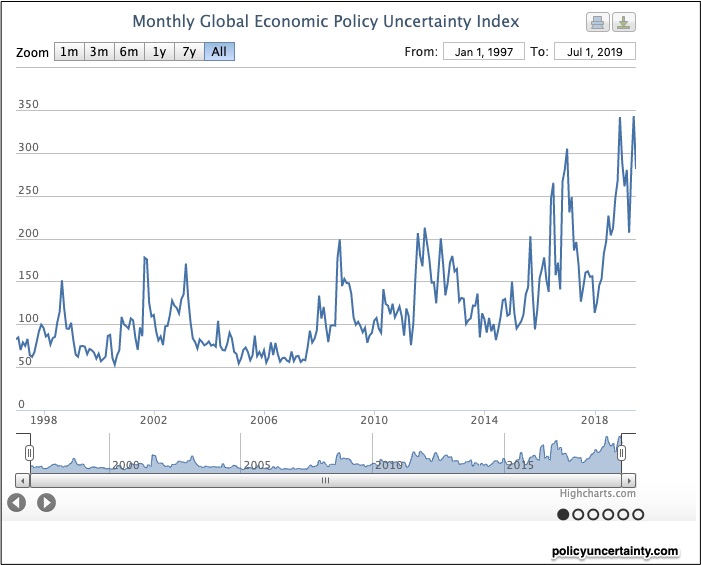 In a new paper, the Federal Reserve has taken us to more precise uncertainty territory. Calling it Trade Policy Uncertainty (TPU), they tried to gauge the uncertainty created by two recent “waves” of trade policy news. From there, they estimated the impact of uncertainty on economic activity.

Below you can see when uncertainty peaked. First we are looking at the beginning of 2018 into the first quarter of 2019. The second wave starts during the second quarter of 2019. Paralleling the “waves,” there is an upward blip in news articles and earnings calls that refer to uncertainty:

The Fed estimated that GDP has indeed been affected by TPU. They believe the initial impact was a global GDP .8 percent decline during the first half of 2019. Next, they predict that the second wave of TPU will again pull global GDP down during the end of this year and the beginning of 2020. The Atlantic Fed says the drag could bring U.S. GDP growth down to 1.5 percent.

The following graph illustrates a correlation between more uncertainty and less economic growth. Because GDP measures the value of goods and services production, decreased growth can reflect less investment, hiring, and consumption: 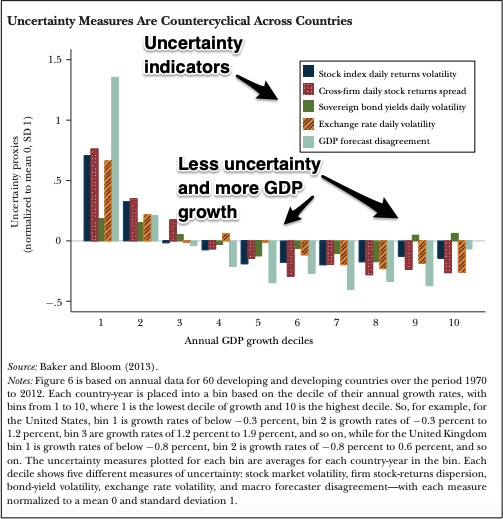 My sources and more: Thanks to WSJ for alerting me to the Federal Reserve study of uncertainty. From there, this paper told more about uncertainty metrics. But for the most fun, I enjoyed looking at different countries at the policyuncertainty website.